Something to Be Thankful For: Smudge is a Good Kitty 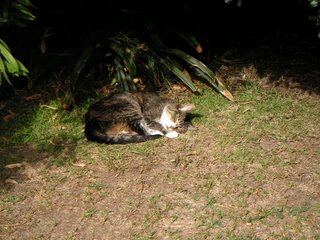 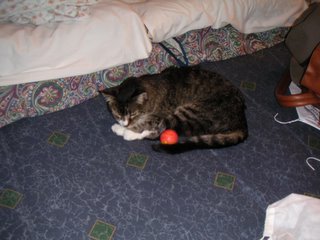 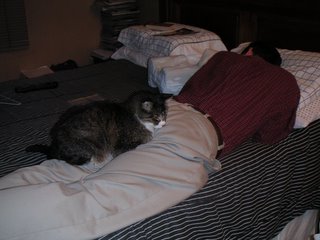 In 1994, when I began dating Amy, I first made the acquaintance of Amy's (or Amy's mom's) cat, Smudge. Smudge lived with Amy and her mom onthe Palos Verdes Peninsula. On one of my trips there, I was sitting outside when Smudge marched up to me, decided I was okay, and sat in my lap -- which is generally a way to get on my good side.

In 1997, when Amy and I got married and we bought our house, Amy brought Smudge and his brother, Goldie, to the house. Initially, Amy was thinking of giving away Smudge, since he had a habit of fighting with other cats; but I warmed to the kitty and asked that we keep him.

Living with Goldie, Smudge, and the other cats who took up residence at our house, I was exposed to the varied personalities of cats, which I previously believed was mere hyperbole promulgated by cat afficionados. Smudge started out rather pugnacious, but has mellowed as time went on. When Goldie passed away last year, Smudge became measurably more affectionate toward people. He used to hide under the bed when guests came over; now he's quite willing to venture out and be stroked by complete strangers. Recently, he's developed the habit of walking over to us and tugging on our pantslegs when he wants to be picked up, stroked, or just paid attention.

Smudge has had some health scares. He takes regular medication; lost a lot of weight a few years ago as he became more finicky about his food; and was on a periodic IV of ringers solution for a while. Nevertheless, he has made it to the advanced age of 19 years old.

Unfortunately, Smudge's long life will probably soon end. In September, he was diagnosed with an inoperable tumor in his head. We are therefore just making Smudge as happy and comfortable as we can during his last months of life. And indeed, he still purrs readily when stroked (or even just when he's sitting with Amy and me). He still leaps up onto the bed, when he's able -- sometimes he needs a boost. And he's still a good kitty.
Posted by Danny Barer at 11/24/2005 04:57:00 PM