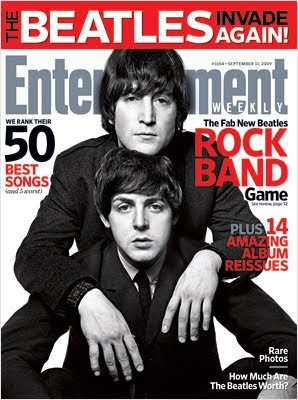 This week's issue of Entertainment Weekly cover-features The Beatles, due to the release of the Beatles edition of the "Rock Band" video game. The issue includes the magazine's choices of the Top 50 Beatles songs. And as with every top # list the magazine runs, the list begins with the number one choice ("A Hard Day's Night," if you want to know -- yes, even though "Yesterday" is one of the most-recorded songs of all time, and "Something" has been covered by dozens, and "I Want to Hold Your Hand" is the band's most iconic song in the U.S., and "She Loves You" has the "Yeah Yeah Yeah" chorus, and there's everything on "Sgt. Pepper" . . . well, it's a good song but a controversial choice), and then runs the rest seriatim (look it up).

Apparently, the mag wants to spare its readers the least possibility of suspense, so it gives away the best choice at the beginning -- leaving the reader to plod through the rest of the list toward the increasingly less desirable choices (if they want to).

Email ThisBlogThis!Share to TwitterShare to FacebookShare to Pinterest
Labels: Entertainment Weekly, the Beatles