The Marvel of Bronze

In the early 1970's, Marvel Comics, enjoying success with its license of Robert E. Howard's pulp-magazine hero Conan the Barbarian, licensed another pulp hero: Lester Dent's Doc Savage, the Man of Bronze. Now, in a strange twist of licensing fate, Marvel's short run of Doc Savage color comics has been reprinted for the first time by the current holder of the license -- DC Comics. 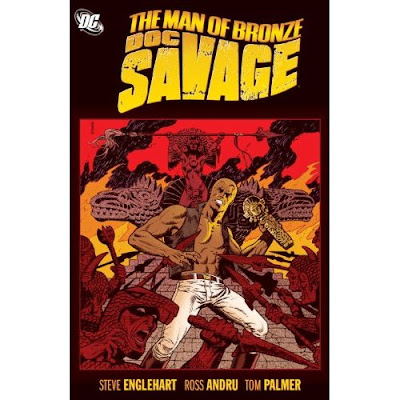 DC's paperback collection of the Marvel series shows how a license that would seem to be a natural for comics can fail. Doc Savage seems tailor-made for a Marvel series; after all, he is one of the prototypes of the comic-book superhero who would come along just shy of a decade after Doc's debut. Although Doc had no superpowers per se, he was a physical and mental marvel who had an origin story (a father who had a squad of scientists raise him to be the pinnacle of human development), a warehouse full of crime-fighting vehicles and gadgets, a Fortress of Solitude (which Superman would appropriate), a life mission of selflessly vanquishing evil, and a horde of weird super-science ne'er do wells to battle. He influenced Superman, Batman, and any number of four-color folks.

Moreover, although Doc's pulp magazine died in the post-war era (during which he was already becoming an anachronism), Doc, like Conan, had a revival of popularity in the 1960's paperback market. Conan's sales were fueled by Frank Frazetta's book covers; Doc's can be attributed to James Bama's stunning cover paintings, which transformed the wavy-haired Doc of the pulps into a Lee-Marvin-like bronze giant with a crewcut and widow's peak.

The Marvel Doc Savage comics did not want for creative talent. The writers included Marvel second-in-command Roy Thomas; Steve Engelhart, who wrote some of the best-remembered comics stories of the seventies, for both Marvel and DC; and Gardner Fox, who actually wrote pulp and comics stories in the '30's and '40's. Artistically, the comics boasted knockout covers by Jim Steranko; and the interiors of most of the issues combined the fluid, cartoony art of Ross Andru with the dramatic finishes of Tom Palmer.

So why did the comic last only eight issues, plus a giant-size reprint (done to tie-in with the abysmal 1975 Doc Savage movie)? It's hard to say nearly forty years (eep!) after the fact. The pacing of the issues (which adapted some of the Doc Savage novels in two-to-three-issue arcs) seems clunky, with lots of exposition mixed haphazardly into the action sequences. One problem was likely the editorial choice to deliver a lot of the exposition through Doc's dialog (even when no one else is present), likely to prevent the comics from becoming masses of narrative captions. The result turns the taciturn Doc of the pulps into a nonstop chatterbox. Or perhaps he merely fell victim to the chaotic world of 1970's comics publishing, in which rising paper and printing costs threatened to destroy comics, and Marvel and DC published tons of reprints in an effort to force each other off the newsstands.

This certainly wasn't the end of Doc's adventures in comics. Marvel ran a black-and-white Doc Savage magazine (tying into the movie) from 1975-1977; and numerous other comics companies have licensed the Man of Bronze since then (including DC, in a prior attempt in the late eighties). But it's interesting to see comics from 38 years ago adapting stories from 30 years before that.
Posted by Danny Barer at 6/05/2010 09:12:00 PM