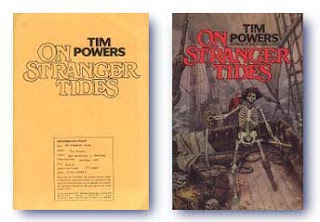 For me, the best thing about Disney's release of the fourth Pirates of the Caribbean movie is Harper Colllins're-release of the novel that "suggested" aspects of the movie's plot, and gave it its subtitle: Tim Powers's ON STRANGER TIDES.

I just finished this terrific tale of piracy and black magic in the 18-century Caribbean, and can't recommend it highly enough. It's got sea battles, swordfights, magical contests, engaging characters, and a pace that never flags. It's far more enjoyable than the movie it "suggested."
Posted by Danny Barer at 6/18/2011 05:31:00 PM