The Gigantic Melancholies of Conan

Last night, we went to see CONAN THE BARBARIAN, which folks are calling a "remake" of the 1982 John Milius flick starring the former governor of California, even though both are adaptations of a pulp character created in the 1930's by Robert E. Howard.

The best part of the movie was Jason Momoa's portrayal of Conan himself, with Momoa conveying both the look and the attitude of Conan as envisioned by such artists as Barry Windsor-Smith. 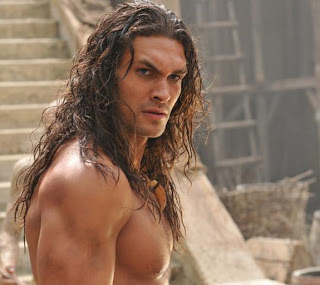 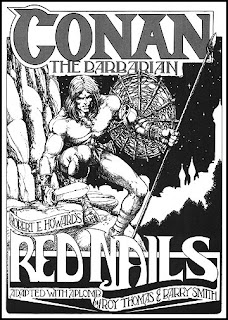 The minus -- and the factor that likely caused the movie to tank at the box office -- was the story. Here are some ways that, in my humble opinion, the movie went wrong (and yes, there are minor spoilers):

-- When it comes to pulp and comics heroes, Hollywood is far too deeply in love with origin stories. In print, the creators dispose of a character's origin as quickly as possible. Sometimes, as for Conan, there is no "origin" at all, except that the character is born and gains a lot of life experience. But here, as in the Milius movie, the writers come up with a traumatic origin for him, and then tell the story of how he seeks revenge on the folks who messed him up. Which is ultimately not very interesting.

-- The prologue revolves around this starfish-like mask supposedly made of kings' bones (although the pieces don't look like human bones) which is a One Ring sort of device that makes the wearer world-dominatingly super-powerful (when combined with another Maguffin). In the prologue, the mask is broken, and the pieces spread out so that they won't be found. Really. Never. No explanation of why the other folks didn't simply destroy the pieces, rather than turn them into a scavenger hunt.

-- When you're hiding a piece of a weapon of mass destruction, why hide it under the floorboards (seriously!) of the most important building in the village? Why not just stick it in a rhubarb patch, or bury it in the woods?

-- At one point, with the heroine in the clutches of the bad guys, Conan makes a completely unnecessary trip to the City of Thieves to collect a completely unnecessary one-eyed thief character so that he can haul one-eye back to, I don't know, pick some locks and whine. Not only does Conan not need this guy (Conan himself was a pretty good second-story man, as the film points out a couple of times), but by the time Conan sails over to a foreign country, collects this guy, and sails back, I expected the evil wizard to greet him with, "Oh, sorry, barbarian. You're too late. Already sacrificed the girl. Evil won. Kneel, slave."

-- I did appreciate the creators of the movie referencing Conan's adventures in the past -- i.e., the actual Howard stories -- such as The Tower of the Elephant and his time sailing with pirate queen/exotic dancer Belit. But why not tell those stories on film? Folks seem to think that the appeal of Conan is simply that of a long-haired tough guy in a world full of supernatural menace. But you can find that in the stories of Conan's many imitators. No, what made the Conan stories special was the stories themselves, the crazed fever-dreams that the mentally unstable Howard (see the excellent movie "The Whole Wide World," or the many scholarly writings about Howard) brought vividly to life. If you turned something like Red Nails or Queen of the Black Coast into a movie, and retained at least some of Howard's imagery and dialogue, that might be worth seeing.

I'm willing to see Momoa as Conan again. But I'd prefer a better movie. Give a barbarian a chance.