Modern-day attendees of science fiction, comics, and anime conventions likely do not appreciate the difference the World-Wide Web has made in documenting and archiving convention memories.

In September 1981, almost exactly 30 years ago, I attended Moscon III in Moscow, Idaho. I attended only one day of the convention. I bummed a ride up from Walla Walla in Southeastern Washington to Moscow, a college town just across the state border from Pullman, Washington, by persuading Conrad and Sharman Boslee, friends I had met in local theater, that it might be fun to attend a smaller version of the comics convention I had attended in San Diego the previous year. (Yes, that was the 1980 San Diego Comic-Con, my first con.) Conrad had already done me a tremendous service the previous summer by loaning me his comics collection, a moving crate that contained comics published from 1964 to 1972 from every comics publisher. The box led to a lot of sleepless nights that summer, and a deep appreciation of the comics of that period.

The artist guest of honor was Tim Kirk. I believe the writer guest of honor was Kate Wilhelm. But I can't tell you for sure, because I cannot find any documentation of this convention online. Nowadays, the smallest one-day local convention is documented in exhaustive detail on a con homepage, and on the blogs, Livejournals, Facebook pages, and Twitter feeds of attendees. But in 1981, home computers were TRS-80s from Radio Shack that read and stored data from cassette tape recorders -- computers so basic that even I did a little bit of programming on the one my dad got to track the stock market. Data transmission was over telephones, at glacially slow speeds. The idea of putting multiple photos and videos online quickly was, well, science fiction.

So now, the only references to Moscons you will find online are some mention of the final ones in the late '90's (when they actually had web pages, which are now defunct) and discussion of them in the obituaries of convention founder Jon Gustafson.

Nevertheless, the con lives on in my memory. It was small (about 300 attendees), but it was marked by quality guests. At the 1981 Moscon, I chatted with ElfQuest co-creator Richard Pini (whom I had met at the 1980 Comic-Con) and his then-assistant, Jane Fancher (whom I met earlier that year because I learned she was working at the bookstore at WSU, the same college my older brother was attending; and who went on to a career as an SF and fantasy novelist). I met Alex Schomberg, the science fiction and comics illustrator who had drawn the insanely detailed covers of the Captain America comics of the '40's and whose career continued into the '80's. I met artists Tim Kirk and Rowena Morrill, and SF writer Nina Kiriki Hoffman before she made a name for herself as one of the premiere urban fantasy writers of the past 20 years. I even met fellow fans of a TV series that was a cult favorite on the verge of cancellation then, Hill Street Blues.

And fortunately, although there were no digital cameras to capture moments of the convention in pixel-perfect detail, there were snapshot cameras. Hence, my attempt to remedy the lack of online documentation of this convention: 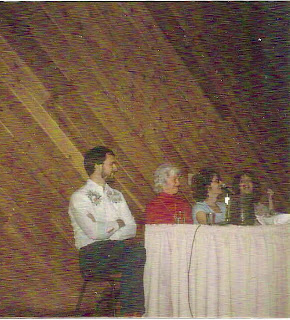 On top is a photo of a panel (I forget the subject matter) that includes panelists Richard Pini, Kate Wilhelm, and Jane Fancher. 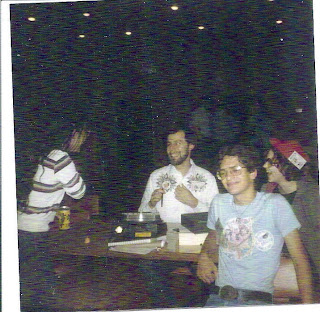 Below that is a photo from later in the convention of Richard Pini and skinny, 16-year-old me.

I wish I had taken a camera to the early conventions I attended. I'm not sure why I didn't; perhaps because photos were such a hassle in that time of flashbulb cubes and photo processing. After all, a photo of a convention doesn't just document the convention; it freezes and preserves a moment of your life.
Posted by Danny Barer at 9/18/2011 12:49:00 PM

Reminds me of when I used to go to Star Trek conventions back in high school. We'd all have to persuade a friend to drive us in his car (which was usually old and decrepit, and practically ready to fly apart at the seams), and coming up with the gas money was always a challenge. Forget hotels, no money for that, we could only go down for the day. And if you couldn't go but wanted to find out how the convention was, it was "find your friend who went the next day at school and ask him how the convention was" No Twitter or Facebook or liveblogging. You're right, pictures were a pain back then, which is why I too don't have any from those days. It's hard to remember life before there were desktop computers, iPads, smartphones and ubiquitous Internet access and digital cameras... But we sure had a lot of fun back then and I met a lot of people I still communicate with today (only the communication these days is a lot faster :) )

The first photo, with Kate and Richard and Jane also includes the late Beth Toerne (then Beth Finkbiner). Just for your records, that is.
If you came to the masquerade you would have seen me as emcee; I was the original founder of SF fandom in the Pullman/Moscow area, as well as the originator of both PESFA (the fan group) and MosCon.
Starting with #3, I gave up the chairmanship of the con to allow Jon to have his shot; I don't believe in hogging the limelight unnecessarily. MosCon is having a revival (in Pullman) this weekend (June 19-21).