On November 5, 2011, we visited Disneyland for Amy's birthday. It was our second trip to Disneyland this year -- surprising for us, since our last trip to the Magic Kingdom before this year was on New Year's Eve 1999. 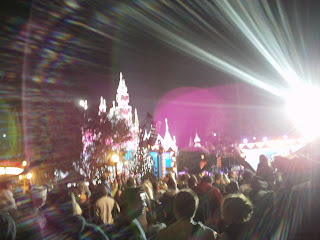 We caught a weather break for this trip: Although both Friday and Sunday were rainy, Saturday was clear and sunny -- albeit chilly for So Cal (weather in the 50s and 60s.) Further, we manage to avoid any serious mishaps or calamities during the trip (although my knee started hurting after a few hours of walking around and standing in line). 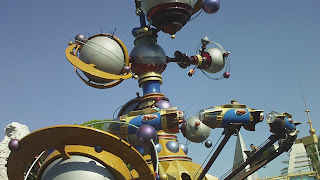 Disneyland in early November is a park in transition. Hallowe'en has just ended (although the Haunted Mansion is still done up in a Nightmare Before Christmas theme which I found a lot of fun), but the park is not done up in full holiday (read: Christmas -- Thanksgiving hardly exists in Disneyland) until November 14. Nevertheless, when we arrived, a Christmas parade was wending its way down Main Street U.S.A., taped for broadcast on Christmas Day. Even more time-warping: That evening, a segment of Dick Clark's Rockin' New Year (to be broadcast on Disney-owned ABC) was taped, to be shown you-known-when. 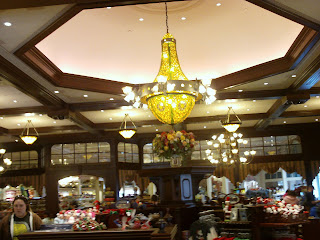 Disneyland is much like Las Vegas. If one approaches it with the right mindset -- an understanding that everything is a facade of imagery and misdirection -- it's a lot of fun. And surprises can still be found: In the Pavillion of Progress (or whatever they're calling it these days), in the midst of a Home of Tomorrow display that already looks like the Home of Last Week, we found a display with Honda's Asimo robot that just astounded us. Here are some videos I shot of this robot's amazing ambulation:


Three more observations I made while enjoying Disneyland:

First, I was surprised that Disney devotes so little energy to promoting its current productions. One would expect some kind of display or attraction in Tomorrowland for Disney's current hit SF movie REAL STEEL, or some kind of ride or sign in Fantasyland for ONCE UPON A TIME, its ABC tv series. You would at least expect one of the omnipresent gift shops to feature merch from these works. But no. Same for recent movies such as ENCHANTED.

Second, the gift shops could use a bit more variety. I know that the Disney Pins have become a hobby in themselves, but nearly every shop seemed to carry the same pins (which could also be had in the Disney World store outside the park's gates). Keying the shops to the locations to a greater degree would seem to make more sense.

Finally, I would expect to find theaters showing Disney cartoons at Disneyland. You will see images galore of Mickey Mouse, Donald Duck, and the crew; but none of the cartoons in which the characters appeared. The only place to see any semblance of such animation is the Main Street Cinema, which shows altered video versions of Mickey Mouse cartoons. (For instance, MM shorts that are color and have sound are shown in black and white without sound.) This is a shame, because despite Disney's TV empire and the multiple channels it owns, Disney's animated shorts seem to seldom be broadcast. Likely many kids who grow up loving the images of Mickey and Donald have never seen any of the classic cartoons in which they appeared. I suspect this is part of Disney's design: Reducing classic cartoon characters to mere images, without personality or character, optimized for merchandising and commerce.

Oh, and I really enjoyed Disneyland. So did Amy. 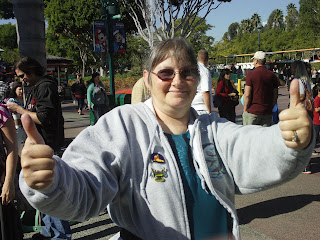 Email ThisBlogThis!Share to TwitterShare to FacebookShare to Pinterest
Labels: Disneyland