A Tale of Two Conventions 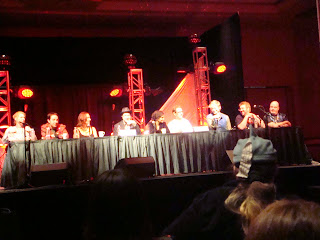 We attended two conventions in November, and they were polar opposites of each other.

The first was Anime Vegas 2011, held November 11-13 in Las Vegas, Nevada. I had attended two other Anime Vegas conventions, and this one was the best run by far. The con was filled with young people, many in costumes; the masquerade was robust and full of entries; and the event vibrated with youth and enthusiasm. In particular, this Anime Vegas was energized by the revival of the license for the Hellsing Ultimate anime, which has been moribund in the U.S. for the last three years. The entire principal English dub cast for Hellsing Ultimate gathered in Las Vegas to promote the soon-to-be-released balance of the Hellsing Ultimate videos. We attended as fans, as enthusiastic as anyone else there.
The second convention was Loscon 38, held over Thanksgiving Weekend. This was a science fiction convention, rather than an anime con (although, in a convention tradition, anime was shown in a video room throughout the con). As is now the tradition with SF conventions, the attendees tended to be older than those who go to Anime Vegas and other anime cons; indeed, many attendees had been going to conventions for 40-50 years or more. The masquerade, alas, was anemic -- only nine entries, little in the way of MC-ing, and judges who were not even introduced until the awards were announced.
We attended this con as dealers (Amy's embroidery business, Heart of the Star, had a table in the dealer's room). That is a fun way to attend a convention, and we had a good time talking to folks from behind the table and selling Amy's wares (which were quite popular with the crowd). But keeping the table running meant that we had to carefully parse the con activities we attended during the show. I attended one panel during the con, as did Amy. (That one panel was a fantastic one, however -- a talk given by Nicholas Meyer, author of The Seven-Percent Solution and director of Time after Time, The Day After, and two of the best Star Trek films. And although there were folks in costume, far fewer costumes filled the halls than those on view at Anime Vegas.
As much as we enjoyed Loscon, however, we wondered how the energy, youth, and enthusiasm of an anime con such as Anime Vegas could be brought to an SF con such as Loscon. After all, many anime fans enjoy the same literary and cinematic SF and fantasy as Loscon attendees. Yet SF conventions such as Loscon don't register on the radar of anime fans. We hope that more young fans find Loscon and conventions of its ilk to their taste; otherwise, SF conventions may be in danger of eventually disappearing.
Lest I end this post on a negative note, I will point out one of the coolest aspects of this year's Anime Vegas. Amy, who is a big Hellsing fan, painted a cardboard coffin a few years ago to match the one shown in the Hellsing manga and anime. She took the opportunity of this reunion of Hellsing cast members to get the coffin autographed by the cast members; and I captured the autographing on video. Here are the video highlights.

As does Patrick Seitz, the voice of Luke Valentine and one of the scripters for the English dub of Hellsing Ultimate:

K.T. Gray, who voices Seras in the English Dub, signs the sinister sepulchre:

And finally, Crispin Freeman, the English voice of Alucard in Hellsing, signs on.