The eighth annual Anime Los Angeles convention took place January 6-8, and was sandwiched by two unfortunate news stories about the anime industry. The first was Bandai Entertainment U.S.A.'s announcement that it would restructure, shed jobs, and stop issuing new titles. The second was Media Blaster's post-con announcement that it is laying off 60% of its staff. Considering that Bandai and Media Blasters are two major players in the increasingly shrinking industry of American anime licensors, these two announcements suggest that the market for anime in the U.S. is waning.

But that sentiment was belied by Anime L.A. 2012. The convention had its largest attendance yet, hitting the 4,000 member cap imposed by the size of the venue. And the enthusiasm of the attendees indicated that American love for Japan's animation project is still going strong.

We attended all three days (albeit I missed most of Friday) plus the Thursday Ice Cream Social, and had a terrific time. The convention is one of the friendliest and best-run anime cons that we attend. The con benefits from a terrific venue (the staff is used to all of these folks in strange costumes, particularly since the LAX Marriott plays host to multiple SF/Fantasy/anime cons throughout the year) and from a huge turnout of folks in terrific costumes.

Here are some photos: 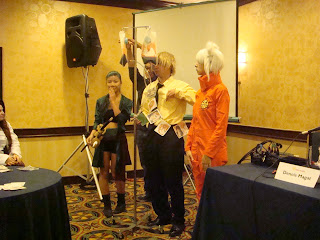 The One Piece fan panel featured some great costumes from that long-running series, including a depiction of sea cook Sanji, currently suffering from severe blood loss from nosebleeds whenever he sees an attractive woman. Hence the IV bag. 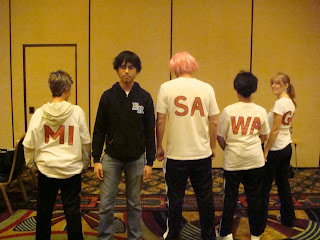 One of my favorite current anime TV series is CHIHAYAFURU. So I was delighted to meet an entire group of cosplayers who dressed up as the high school Kurata players from that series. 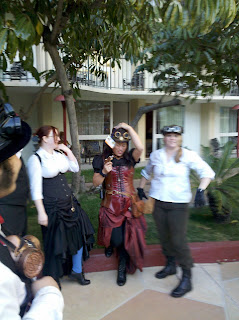 Steampunk and anime are intimately connected (particularly with all of the anime steampunk series and movies that have been done), and so Friday afternoon saw a steampunk costume gathering, in which Amy and I participated. 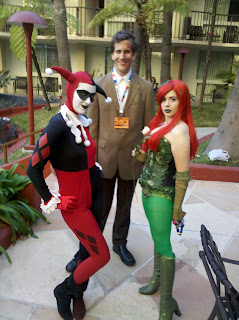 And, of course, the convention saw some crossover non-anime cosplay, from both DC . . . 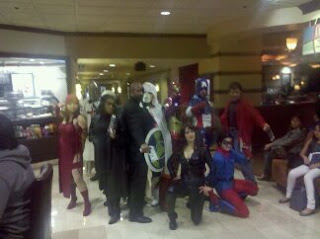 I was a bit stunned (though, oddly enough, not terribly so) by the Bandai and Media Blasters announcements.
(You also forgot to mention the tiff between Funimation and ADV) Particularly in light of the discussion we had on the Otaku no Podcast year-end wrap up episode (which I still need to edit and post... I know...) The American anime distribution landscape is definitely changing.