What it is about The Avengers? 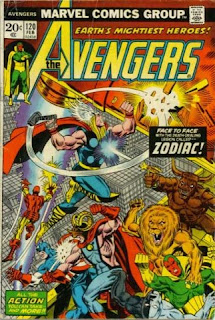 Back in 1976, I picked up Avengers #149 -- the final issue written by Steve Engelhart, drawn by a then-newcomer named George Perez -- and was so smitten that a few issues later I subscribed (at the princely cost of $4.00) and continued to buy the title, with a few pauses (such as when Marvel subcontracted production to another publisher in the mid-90s)since, along with reprints and back issues. Now, with a Marvel/Disney produced movie coming out (and grossing nearly $180 million before it has even been released in the U.S.), the question remains: What is the attraction of a series that started out as a blatant ripoff of DC's Justice League of America title, featuring a team of Marvel heroes who lacked their own titles? 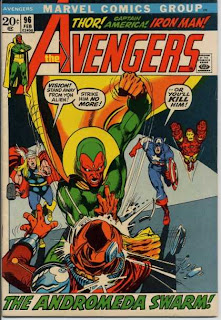 Perhaps it's the top-notch talent that has worked on the comic. The first 13 years of the title were written by only three writers, and they were among the beest in the business: Stan Lee, Roy Thomas, and Engelhart. The first artist was the Marvel Universe's co-progenitor, Jack Kirby. Subsequent issues featured the work of Perez, John and Sal Buscema, Neal Adams, Barry Smith, John Byrne, and other top illustrators.

But the heart of the title's success is that it epitomized the Marvel formula of combining cinemascope-like slam-bang action with interpersonal conflict and a degree of unpredictability. In contrast to the rather genteel adventures of the Justice League, the Avengers lost founding member The Hulk in the second issue, when he left in a huff. (They fought him a couple of issues later.) Two years into the run, Lee and Kirby dumped all of the founding members, and staffed the Avengers with Captain America (revived from the Golden Age in the fourth issue) and three reformed criminals. (One of them, Hawkeye, appears in the Avengers movie.) In the late Sixties and early Seventies, writers Thomas and then Engelhart emphasized the drama of the lower-tier characters who appeared only in the title (Vision, Scarlet Witch, Mantis, Yellowjacket, Wasp) over that of the big guys (Thor, Captain America, Iron Man) who gravitated back to the comic even after getting their own titles. 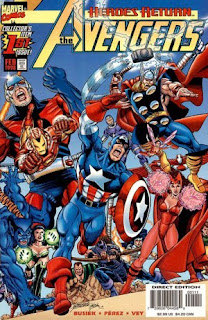 I'm seeing the movie early Friday morning. And with Joss Whedon (who excels at the sort of action-combined-with-soap-opera described above) at the helm, I have high hopes that the movie will embody the spirit that has kept the comic a going concern for nearly fifty years.
Posted by Danny Barer at 4/29/2012 04:55:00 PM