One of the inevitable side-effects of growing older is that the creators of works that defined or shaped your childhood disappear. Recently, two artists who were instrumental in my childhood left us.

In mid-August, Joe Kubert passed away. Although his career in comics spanned nearly 70 years, one of the highlights of his time in comics was his two decades of work on DC's war comics. At the time I was reading them, the early '70's, Kubert was editing them, along with drawing covers for several titles (particularly "Our Army at War," featuring Sgt. Rock) and frequently drawing stories. Since I read and enjoyed war comics long before I started reading superhero comics, Kubert's approach to the genra -- one that focused on the individuals fighting the war, and those caught up in the battles, with frequent closeups of faces with haunted eyes -- helped shaped my appreciation for comics. 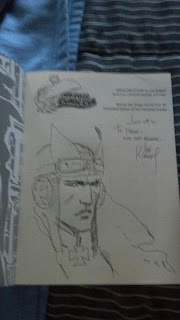 I previously blogged about Kubert's work here and here

Hal David, who passed away this past weekend at the age of 95, was a lyricist whose name I didn't know as a kid, but whose songs were everpresent. It's easy to put down his collaborations with Burt Bacharach as elevator music or easy-listening fodder. But the truth is that songs such as "Raindrops Keep Falling on My Head," "This Guy," "Walk on By," "What the World Needs Now," etc. became hits, and remain in the mind decades after they were first recorded, because they seem to bypass the intellect and grab the emotions. Like a cartoonist's drawing that conveys so much because the lines are so clear and simple, the seeming artlessness of the lyrics amounted to art.

The creators of your childhood pass away. But the effects of their work upon you remain.