Kamichu: A Little Bit of Heaven 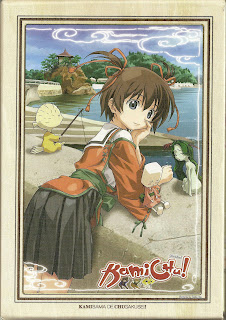 If you're lucky enough to get the Imaginasian channel (Channel 157 on Time-Warner in LA), I recommend that you tune in at 8 p.m. on Tuesday night. That's because the cable channel's Anime Ener-G programming block (sponsored, ghostlike, by Geneon, even though Geneon itself is in reorganization and won't be buying advertising anytime soon) will rerunning episodes of a series we've grown to love, KAMICHU.

KAMICHU is a program that I cannot imagine an American channel would run -- in part because the concept is deeply rooted in Japan's pantheistic Shinto religion. The series' main character is Yurie (pronounced yury-eh), a rather immature 13-year-old girl who lives in a small seaside town near Hiroshima in the '80's. In the first episode, Yurie announces to her best friend that the previous night she somehow discovered that she is a god. And she is. In the Shinto religion, there is a god for everything that exists. And so the existence of a junior high school god is worthy of some note (there's an announcement on the school PA right after she inadvertently creates a typhoon with her face in the eye of the storm), but not a lot of fuss.

The title of the series is the magic word her friends make up for her to say to summon her power -- a contraction of the Japanese words for god and junior high student.

We learn that she's more powerful than the resident god in the Shinto shrine where her friend Matsuri lives (a god who acts more like a servant than a deity, and who yearns to be a rock star). We learn that the land is swarming with gods, who are generally invisible to all but Yurie and those whom she temporarily gives magical sight. She sets up a consultation tent at her school during lunch hours, and grants wishes to some who approach her with worthy wishes (although one of her first supplicants, the Prime Minister, turns out to have an agenda).

One could imagine that a comedy about a teenager who obtains divine powers would devolve into slapstick or lowball comedy. Certainly most kids Yurie's age could not be trusted with such might. But Yurie simply does not think of abusing her power for personal purposes (except, say, to change the TV channel from across the room without a remote). She remains dedicated to trying to live her life as a normal junior high student, yearning to catch the attention of the largely oblivious boy she likes, and dealing with Matsuri's various schemes to capitalize on Yurie's powers to help Matsuri's shrine.

The series overall has a soothing, relaxing feeling, from the opening harmonica theme through the cute closing. Aiding this is terrific writing from Hideyuki Kurata (creator of the READ OR DIE franchise, and screenwriter for the HELLSING ULTIMATE series) and the creative team that produced the ROD THE TV series a few years ago. A sign of the care put into the series is the attention paid to the setting. The town in which Yurie lives, the hill she rides her bike down, the ferry she and her friends ride to school, the businesses and the shrine all feel so real that if the viewer woke up in the town tomorrow, they could probably navigate their way around.

If you want to watch an anime that does not go down like a twice-frozen TV dinner (which happens with some of the more derivative series), check out KAMICHU.
Posted by Danny Barer at 11/18/2007 09:05:00 PM