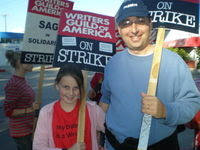 Today was "take your kid to the picket line" day for the Writers Guild of America strike. I drove by Fox Studios on my way to work in Century City, and saw kidlets hanging out on the picket line with their striking scribe parents. And from my Cousin Lee Goldberg's blog
comes this picture of him and his cute daughter Madison picketing in Studio City.

I recall that in 1988, when we had the last extended writer's strike, TV entertainment options included home video (mainly rented) and cable movies; but was still far more limited than now. Today's couch potato has ready access to thousands of hours of TV series, on DVD, on iTunes, even illegally on YouTube. Will they feel the pinch of a lack of new TV content?
Posted by Danny Barer at 11/12/2007 08:52:00 PM

Was it 1988 that we stopped for lunch at that place off the freeway and you had that discussion with a writer on strike named Black who hd written an episode of Startrek among other things?

Is he related to Jack Black?