Death of an American Action Figure 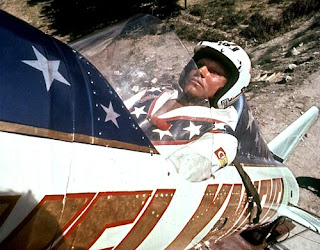 The celebrities we remember best are the ones that somehow embody not the American dream, but an American archetype.

The Northwest's Robert Knievel -- nicknamed in his youth "Evel," likely because of his criminal past -- was not just famous for his increasingly ambitious stunts. Instead, he was exactly what America needed in the turbulent, ambiguity-filled days of the late '60's and early '70's in which I grew up. He was so many things America loves. He was a showman. He was a braggart. He was physically smashed repeatedly, only to rebound and come back for more. He was a bit of a rogue, and a bit of a thug. Indeed, he may have inflated his accounts of his criminal past: He told the media that when he sold motorcycles in Moses Lake, Washington in the mid-sixties he embarked on a crime spree of safe-cracking, armed robberies and beatings.

His popularity, perhaps not coincidently, coincided with our cinematic celebrations of brilliant but rough-edged fanatics ("Patton") and slick, daring criminals ("The Sting," "Paper Moon," "Butch Cassidy and the Sundance Kid," "Bonny and Clyde.")

Europe may have invented and perfected the circus, but America perfected the carny. Knievel was carny through-and-through -- a side-show attraction who could make us momentarily forget about Watergate by such Wile E. Coyote antics as shooting across a canyon on a rocket-powered "motorcycle" (and, like Wile E., landing on the canyon floor with a quiet "poof.")

To me, and to many other boys who spent their single and early double digit years in the sixties and seventies, Knievel was an action figure. Literally. Likely no kid who was around during the seventies can forget the commercial for the Knievel action figure. The figure came with (appropriately) a "swagger stick," and one of the most marvelous accessories in the history of seventies' toys: a scale-model stunt motorcycle, complete with shock absorbers. The kid would place the bike in a red device with a crank. Through the magic of gears and friction, turning the crank would produce a whine that parodied a high-performance engine revving. At maximum torque, the bike would shoot out of the starter, across a ramp, and then crash into the ground. The Knievel figure was made of rubber, so that it could bounce back like Knievel. The bike would eventually be smashed to bits -- again, much like the real Knievel.

As may be typical of Americans, Knievel wrote physical IOUs in his early years that his body began to call as he aged. Much like the American economy, the body can seem to bounce back from catastrophic traumas; but each one weakens the infrastructure in ways that can never fully be eradicated. Hence, Knievel ended up in a walker when other men his age were still out jogging.

In short, he never needed to wear those stars and stripes on his Nomex coveralls. He was unmistakeably American.