The Line of the Tiger 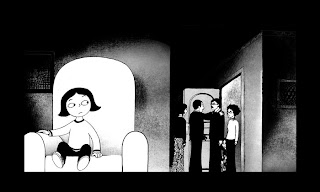 Commercially, the movie adaptation of the graphic novel PERSEPOLIS has a lot against it. It's a 2-D animated film. In black and white. In French (with subtitles). It deals with emotional complexities. It portrays in a favorable light characters who espouse Communism. (Indeed, in one hallucinatory sequence, God and Karl Marx share space in Heaven.) And the viewpoint character is an Iranian woman.

Screw commercial success. PERSEPOLIS is one terrific film. Co-directed by the writer/artist of the original graphic novel, Marjane Satrapi, PERSEPOLIS tells Satrapi's story of growing from childhood to young womanhood, first in Iran during the Islamic revolution and the Iran-Iraq war, then in Vienna in the mid-eighties, back in Iran, and then finally moving back to Europe. Satrapi portrays herself as a smart-mouthed and fallible intellectual who feels out of place everywhere, whether buying bootleg Iron Maiden tapes on the streets of Tehran or shouting at her European friends for espousing Nihilism while people in Iran are imprisoned, tortured and executed for their beliefs. It can drag the viewer into the depths of Satrapi's depression, and then suddenly convulse the viewer with hilarity (including a montage in which a twenty-something Satrapi works to pull her life together, while singing -- off-key -- "Eye of the Tiger," shadow-punching the camera to the beat.)

The animation is absolutely gorgeous. The line is what does it. Gracefully curving, it evokes both Al Hirschfield and Aubrey Beardsley in its expressiveness, and in the balancing of white and black. Cartoonists often say that drawing with a simple line is harder to pull off than filling a drawing with details, because the honesty of simplicity leaves no room to fake it. The animators have pulled it off. Also notable are the scenes told in silhouette, which are reminiscent of UPA and Disney animation of the '50's.

Email ThisBlogThis!Share to TwitterShare to FacebookShare to Pinterest
Labels: Persepolis