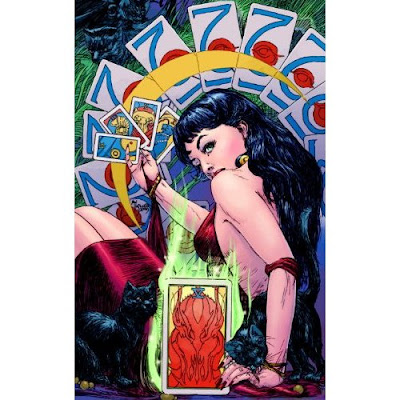 While I haven't been following the Vertigo comics series MADAME XANADU, featuring the former DC horror comic hostess, I had to pick up the second trade paperback collection of her adventures, EXODUC NOIR (http://www.amazon.com/Madame-Xanadu-Vol-Exodus-Noir/dp/1401226248), when I discovered that Xanadu's designer, Michael Kaluta, drew both the covers and the interiors.
Kaluta was one of a school of artists in early-'70's comics who combined the influences of 19th and early 20th century romanticist illustrators with the storytelling conventions of comics. It was a work-intensive process, and Kaluta, like most of his contemporaries, has drawn comics only sporadically over the last 35 years. His detailed, laborious style lends itself more to covers and prints than the grind of interior comics illustration.
But he drew these issues, and did so as well as or better than any work in his career. The story, by Matt Wagner, plays to his strengths -- shifting back and forth between the beauty and horror of 15th-century Spain, in the midst of the Inquisition, and 1940 Manhattan. The latter allows Kaluta to return to the streamlined autos, snappy suits, and atmospheric Depression-era alleys he drew so well in the 1970's SHADOW comic.
It's rare to read a comic these days where every page impresses, where each panel shows thought and intelligence in its design. It's even rarer that the magic does not stem from computer special effects, but only from pens and brushes and ink. I recommend this one.
Posted by Danny Barer at 2/16/2010 08:00:00 PM