Folks who have watched network TV in the last few years have likely noticed that the networks have ratcheted up product placement, to the point of embedding commercials for products into the stories of episodic television. The reason: People DVR-ing the shows or watching them on DVD are skipping the commercials.

I'm therefore surprised that no one on network TV has picked up on a product-placement technique that Japanese animation TV producers have used for decades: Instead of using a single theme song, year after year, long-running series (or even ones that last just 26 episodes) switch out opening and closing theme songs and credit sequences after a certain number of episodes.

That enables the show to enlist the funds of a music company. The opening credits sequence essentially serves as a music video for the song, which the company then markets as a single/MP3 download. The TV producers get money, the music company gets sales, the artist gets exposure, and the fans get some variety.

These thoughts come to mind because of a purchase I made this past week: 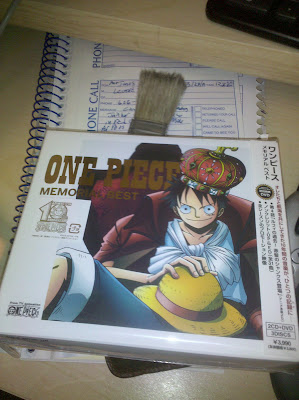 The ONE PIECE MEMORIAL BEST CD/DVD set collects 16 opening and 16 closing sequences that this ten-year-old anime series has amassed in the course of its run. As of mid-March, it was #1 on the Japanese charts.

Imagine if the SMALLVILLE series, which has been running almost as long, swapped out its opening theme every 25 or so episodes, rather than keeping the Remy Zero "Save Me" theme (which sold some Remy Zero CDs when the series was first released, but likely furnishes few sales now) for the entire series run. That the series has kept the same theme song is particularly odd because for years Warner Music used the series to market its music, with an announcer stating at the end of each episode, "Tonight's episode featured the music of ______, available on Warner Records."

Some might say that keeping the same opening credits theme year after year draws the viewer into the room when they hear the familiar strains. That holds little credence now, when so many shows do away with opening theme songs altogether.

Email ThisBlogThis!Share to TwitterShare to FacebookShare to Pinterest
Labels: One Piece