As someone who has read and collected Batman comics for decades -- and who has read many Batman comics stories published before he was born -- I have to say that many current comics artists simply do not "get" Batman. The Batman is one of the best-designed superhero characters of all time. That's plain from the number of consumers who have never read a Batman comic, and perhaps have never seen the character's 1960's TV show or all of his various animated incarnations over the last 45 years, yet are drawn to T-shirts or toys or other merchandise bearing his image. Batman, when drawn right -- with the right balance of shadow and light, fluidity and solidity -- looks cool. No matter that a Dick Sprang Batman from the mid-fifties is drawn in a completely different style from a Marshall Rogers Batman from the mid-seventies, or that a Jerry Robinson Batman from 1942 does not look exactly like a Carmine Infantino Batman from 1967. When the artist gets it right, you know it's Batman.

Unfortunately, many artists these days don't get it right. They have the necessary costume elements there; but it's not Batman. It's a character in a Batman suit. That doesn't mean the art is necessarily bad. They just don't get the character right.

What a treat, therefore, that the week of October 7, 2010 brought two new comics from artists who know how to draw Batman -- artists who first became known for drawing the character around 40 years ago.

One of the comics was issue #4 of BATMAN ODYSSEY. ODYSSEY is an extraordinary monthly series written, pencilled, and in its first two issues inked by my favorite Batman artist, Neal Adams. 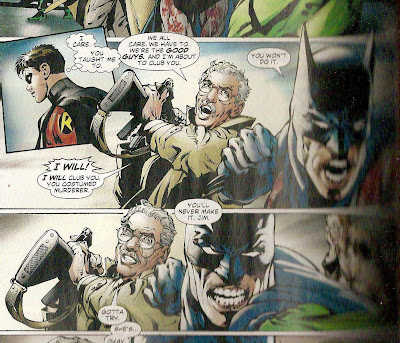 Adams intends ODYSSEY as his definitive take on the character. I take some issues with his vision of Batman: Chatty, somewhat smart-assed, and wearing his emotions on his sleeve. That's particularly true in this issue, in which he thinks a criminal has killed a little girl that he was protecting, and he proceeds to pound the guy into hamburger while Commissioner Gordon and his cops try to talk him out of killing the man. (And I won't get into Adams's mulleted Aquaman.) But I have no complaints about the art, which not only equals the work Adams did from the late '60's to the early '70's on Batman but surpasses it. Even more extraordinary -- both for Adams, given his track record, and for modern comics in general -- is that each monthly issue has come out on time.

The week also brought a nice presentation of an inventory story (from an unspecified year -- although, from the art style, I believe it would be the early '90's) by Bernie Wrightson, ably inked by Kevin Nowlan. 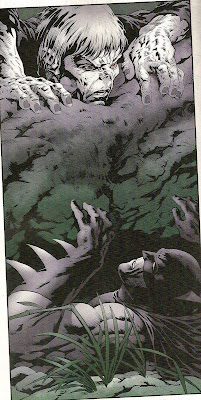 This treat is accompanied by a reprint of Wrightson's first Batman story, a 1973 issue of his and Len Wein's SWAMP THING series, with an appreciation by Wein at the end. In this case, the art in the earlier story is better, in my opinion, than in the later Wrightson tale. But that does not lessen the fun of reading a comic in which the artist gets Batman right.

Fans who have read the character only in recent years may take issue with my preferences. That's fine. Batman is a resilient enough character to accommodate many artistic visions. But I'm glad that I can occasionally see new comics featuring Batman.
Posted by Danny Barer at 10/10/2010 03:23:00 PM