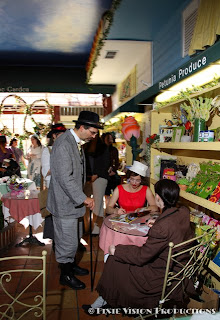 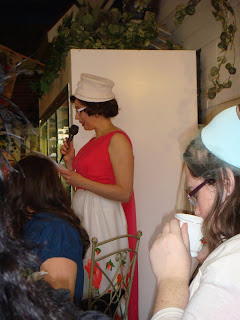 I have written in the past that I am impressed not only with the novels from the author who writes as Gail Carriger, but with her marketing savvy. Ms. Carriger has not only created a series of witty, entertaining steampunk fantasy books, the Parasol Protectorate (with "soulless" protagonist Alexia Tarabotti), but she has created an entire persona to go with it -- tea and fashion maven Carriger -- and works tirelessly to present that persona via blog, Twitter, and personal appearances.
Her efforts have paid off: In an era in which print sales of books are ebbing, the second and third books in her Parasol Protectorate series landed on the New York Times Bestseller list in 2010 -- quite a feat, especially when one considers they were her second and third novels ever published. 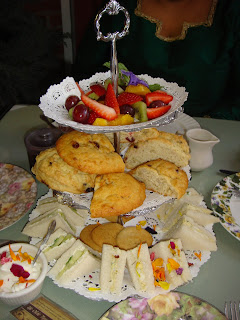 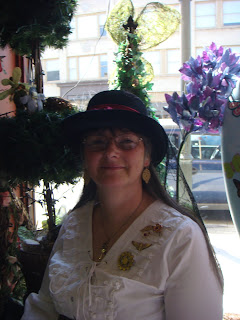 Last week, Amy and I had the pleasure of taking part in one of the events designed to promote Ms. Carriger's books: a tea held at a nice tea/rose house in Old Town Pasadena. The event sold out, and the rather small space was jammed with elegant outfits as folks sipped tea and nibbled on scones and finger sandwiches. Ms. Carriger made sure everyone at the tea had a chance to talk with her: She went table to table as people ate, and later set up a signing table in the middle of the room. In between, she read from the manuscript of the fourth book in the series, HEARTLESS (which comes out in July), and answered questions. If only all promotional events were this much fun.
(The photo of me is from Pixy Vision Productions, the official photographer for the event. All other photos are by me.)
Posted by Danny Barer at 4/17/2011 04:23:00 PM