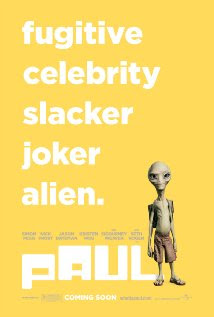 It is almost inconceivable that a movie like "Paul" could have been made (at least as a major release) 20 or even 10 years ago. Ten years ago, the gold standard for a science fiction satire-comedy was "Galaxy Quest." Now, "Galaxy Quest" is a darn good movie, with some spot-on satire; but it represented the point of view of those outside SF fandom looking in -- less of an inside joke than a look-at-them joke. "Paul," on the other hand, is made by SF and comics fans, and is largely for such fans -- particularly since folks not familiar with the last 34 years of SF films won't get a lot of the jokes. (It takes a certain familiarity with the culture to appreciate the scene in which a Man in Black shoots his two-way radio with a pistol, then snarls, "Boring conversation anyway.")

"Paul" is a road movie -- usually a good subject for a film, because it combines character development with movement and scenery. Two science fiction fans, a novelist and an artist, travel from England to the U.S. to attend Comic-Con International: San Diego (shot on location, of course); then rent an RV so that they can tour UFO sites throughout the Southwest. En route, they encounter something they have fantasized about, but for which they are completely unprepared: An actual alien -- one who looks like the traditional Little Green Men of legend, but who is imbued with the smart-alecky slacker sensability of Seth Rogen (whom I like much more as a voice actor than as a there-on-screen actor). What follows is a mixture of thwarted expectations, slapstick, satire, and loads of in-jokes -- and, oh yes, a story.

Most of all, "Paul" shows that the science fiction and comics fans whom movie-makers used to denigrate are now often the folks in charge of putting out movies.
Posted by Danny Barer at 10/02/2011 09:04:00 PM