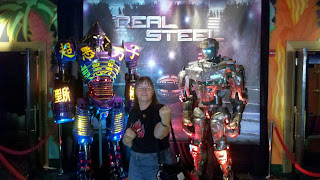 We saw REAL STEEL this morning at the El Capitan, Disney's Hollywood movie palace. As you might have heard, this movie is a reworking of Richard Matheson's 1950's short story "Steel," which was also turned into an episode of THE TWILIGHT ZONE. Which is fitting, because although this movie features modern special effects, clothing, hairstyles, and technology (since it is set only 14 years into the future, the creators can get away with pretending current fashions will change as little in that time as they have changed since 1997), this film is resolutely old-fashioned, in a quite pleasant way.

The film's story arc -- a ne'er-do-well fight promoter's journey to redemption through the stubborn-yet-loveable kid he abandoned -- could have been told in any decade. The history of cinema is full of loser fathers and plucky, never-say-die kids who worm their ways into the coldest of hearts. And the formula isn't hurt by beautiful cinematography that celebrates both the neon of the city and the sunsets of the heartland. Or the score by Danny Elfman, that swells appropriately when the score needs swelling. Or the montages and slow motion segments that deftly manipulate the viewer's emotions.

If this sounds like criticism or mocking, it isn't. REAL STEEL is populist entertainment, science fiction less concerned with making large points about humanity than simply telling a smaller story of humanity and technology, meeting at the junction of sports. And if it throws in a little of a kid teaching a robot to dance, and American heroes (one played by an Australian actor) vying against a Russian woman in a too-tight dress and an arrogant Japanese mecha designer, well, that's just part of the package.

REAL STEEL is the sort of movie that annoys movie critics and goes on to make a solid showing at the box office. Because REAL STEEL tells the type of story that American movies excel in showing. It's a good popcorn movie. And in the mid-autumn film market, that's enought.
Posted by Danny Barer at 10/10/2011 08:03:00 PM