The "Doctor Strange" Movie: How Not to Mess It Up 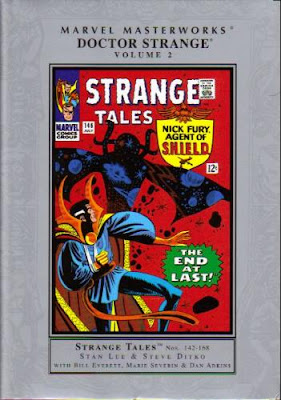 The word on the Internet (or, more precisely, from Kevin Feige, head of Marvel Studios) is that one of the Marvel heroes not licensed to another studio who will appear in a forthcoming Marvel Studios movie is Doctor Strange.  Now, Marvel Studios has already taken my all-time favorite Marvel comic book, The Avengers, and turned it into a film that pleased both me and the movie-going public, to the tune of over a billion dollars at the box office and probably a few more in merchandising tchotchkes.  So the studio probably doesn't need my advice for adapting the good doctor, one of my favorite Marvel characters, into a film.  Nevertheless, I'm going to offer it.  Here are my suggestions for making a successful Doctor Strange film that conveys the spirit of the comic book:

Strange's character arc is that of an arrogant, greedy, successful man who loses everything; who is deeply wounded in spirit, and does not heal until he is willing to put the welfare of others above his own; and who constantly struggles with the conflict between his inherent arrogance and the nobler parts of his being.  Sound familiar?  Boiled down to its essence, it's the approach Jon Favreau and the various writers of the two Iron Man films have taken in adapting the character of Tony Stark.  The writers of the Doctor Strange movie will have the tricky job of  bringing out and focusing on the essential aspects of the central character (something the Marvel Studios movies have been good at) without duplicating Stark.

2.  Don't give him instant powers.

Doctor Strange is not necessarily original (he follows in a long line of comics sorcerers, and his origin is redolent of pulp mysticism and Lost Horizon), but he is unusual among comics heroes in that he neither obtained his powers in an instant (through an insect bite, or a radioactive bombardment), nor was born with them like Superman.  Instead, as an adult, he made the decision to change himself by devoting his life to scholarship -- and earned his abilities by learning them.  That's an essential part of his personality.  The movie makers should resist giving him sorcerous abilities in a flash of light (a' la the 1970s Dr. Strange TV movie) and show him learning them over the course of several years -- even if that's done with a handy montage, as indeed it was in the comics.

3.  For visuals, look to the best artists.

Although several distinguished artists have drawn Doc's adventures, the two most distinctive illustrators -- and the ones most associated with him -- are his creator, Steve Ditko, and 1970s Strange artist Frank Brunner.  Each created visuals for the strip that had never been seen before in comics, and that have never quite been duplicated.  Just as Sam Raimi modeled his Spider-Man movies after panels from Ditko's and John Romita Sr.'s stints on that character, and the creators of the CAPTAIN AMERICA:  THE FIRST AVENGER and THOR used Jack Kirby's art as the starting points for their visual takes on those characters, the Doctor Strange movie designers should use Ditko's and Brunner's art as their touchstone for designing the look of the movie.

When writing the dialogue for the Doctor Strange strip in the Sixties, Stan Lee indulged his love for the English language at its most eloquent.  Strange was an educated man who spoke in an educated manner.  Further, he spoke spells that were bits of doggerel poetry in which he invoked impressive-sounding Lovecraftian deities and beings, spells that were one of the most fun aspects of the strip.  (Alas, they've been pretty much dropped from the version of the character currently appearing in comics.)  The THOR and AVENGERS movies showed that characters who spoke formal, almost Elizabethan English could be depicted without losing the audience, especially if surrounded by ordinary folks who speak ordinary (albeit the Hollywood stylized version of ordinary) American English.

The Marvel movies have shown that the right kind of humor (i.e., humor that does not derive from making fun of the characters) goes a long way.  The Doctor Strange strip has not necessarily lacked for humor; but it's always been a more subtle variety than might be found in, say, Spider-Man.  Doc may indulge in the occasional wry remark, but he's never been a laugh-a-minute guy.

The THOR and AVENGERS movies showed that Marvel films could indulge in the more mystical, cosmic aspects of the Marvel universe and not forfeit the audience's suspension of disbelief.  The filmmakers should avoid the temptation of watering down the subject matter that every maker of a comics-based film faces.  If it's handled right, a movie can show us all of the dimension-hopping, Dali-esque visuals inherent to Doc's adventures while still entertaining the folks who have never picked up  a comic in their lives.

All film is a kind of magic.  It is born of the illusion of movement created by persistence of vision.  Movies like the LORD OF THE RINGS series have shown that movie magic can indeed consist of showing magic.  It's time to use that magic to bring Doctor Strange to life.
Posted by Danny Barer at 2/03/2013 10:36:00 PM