Gallifrey One: 24 Years of Who

The Los Angeles area hosts many genre conventions, but Gallifrey One is an extraordinary one.  Although it generally celebrates British science fiction (and, to a decreasing degree, television science fiction in general), it has always focused on a single venerable science fiction series:  DOCTOR WHO.  It has been put on every year for 24 years.  That means that it started just a few years after Sylvester McCoy closed out the 26-year run of the original DOCTOR WHO series.  It continued during several years when no new WHO material came out, and fans were left to pore over the existing episodes and reconstruct the episodes that the BBC simply erased from existence to save tape space.  It was buoyed by the 1996 Fox pilot that attempted to resurrect the series (with McCoy regenerating into Paul McGann), but that boost faded when the pilot was not picked up.  When we attended some Gallifreys in the mid-to-late '90s, the show was frequented by a few die-hard Who fans, and featured extensive programming on then-current non-who SF shows such as BABYLON FIVE.

And the con has benefitted from the 2005 resurrection of DOCTOR WHO into a critically-acclaimed series, with first Christopher Eccleston, then David Tennant, and currently Matt Smith playing The Doctor in a sophisticated, well-crafted show that has become beloved on both sides of the Atlantic. 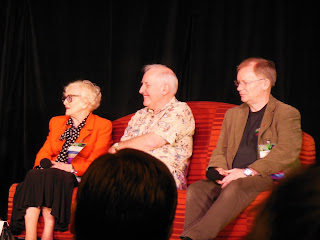 No wonder that the most recent Gallifrey One -- the first one that we have attended all three days of -- became the first to sell out, with some 3,500 attendees.

And the con bent over backwards to entertain those attendees, bringing a huge number of guests from England and other countries to meet the fans.  There was a confluence of guests from the ongoing series (most prominently, Freema Agyeman, one of the companions to David Tennant's Doctor and a frequent guest star afterwards, and several actors from the most recent season) and the original  (including Sylvester McCoy, his popularity rekindled by his appearance in Peter Jackson's THE HOBBIT:  AN UNEXPECTED JOURNEY), as well as behind-the-scenes folks. 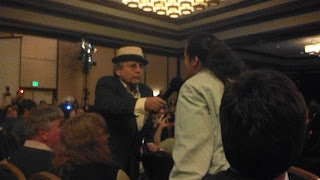 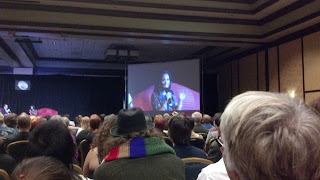 The diversity of guests was demonstrated by the meet-the-guests brunch we attended on Sunday.  Within the course of an hour and a half, we dined with Phillip Hinchcliffe (producer of the series in the 1970s), Dick Mills (who did sound effects for every episode of the original series), and actors who had played companions to various Doctors in the '60s and '70s.  Further, each was a gifted raconteur, delivering often fascinating stories in that cultured British accent redolent with the entire history of english-language theater. 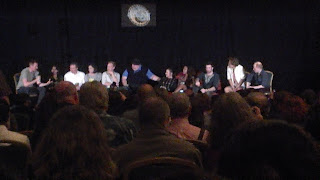 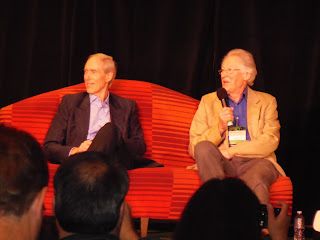 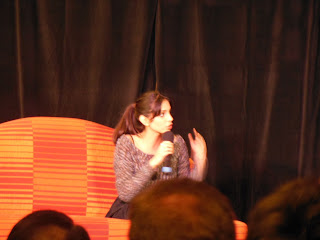 The fans definitely got into the act.  The costuming at the convention is at a near professional level, bringing admiring words from one of the guests who made costumes for the actual series in the 1970s. 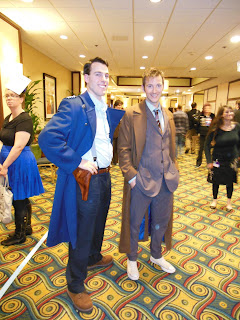 Now that the convention is a commodity that sells out, those who want to attend should remain alert for the March 8, 2013 sale of memberships to the 2014 convention.  It's a great way to spend Valentine's/President's day weekend.
Posted by Danny Barer at 2/18/2013 05:10:00 PM