Here's the way things work in pop-culture land, where derivation eclipses source, young creators inject new vitality into old properties, and you're only as old as your last blockbuster. In the beginning (the 1950s), there were the Ian Fleming James Bond novels.  These begat the ultra-popular film series that began in 1962.  The Bond novels mentioned the real-life spy organization SMERSH and the made-up crime syndicate THRUSH, each of which was an acronym.  In 1963, TV producer Norman Felton, inspired by the Bond novels, collaborated with Fleming in developing a TV show about a spy.  The only lasting contributions from Fleming were the names Napoleon Solo (which Fleming recycled from the novel GOLDFINGER) and April Dancer (later to be used for a spinoff series).  The series debuted on NBC in 1964 as "The Man from U.N.C.L.E."  (For a great account of the making of that series, I recommend "The Man from U.N.C.L.E." book by Jon Heitland from St. Martin's Press.)  The series was wildly successful in the spy-crazed, hero-crazed Sixties. 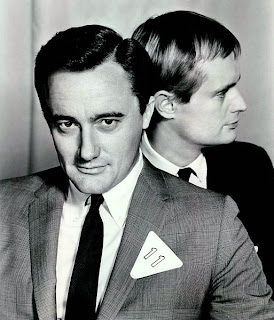 And in the manner of pop-culture phemonena, U.N.C.L.E. begat similar anacronymed spy organizations in other media, including several in comic books.  Oddly, the only one that endured was a derivation of a derivation.  Around the time of the TV series's genesis, Marvel Comics progenitors Jack Kirby and Stan Lee created a World War II-set comics series, "Sgt. Fury and His Howling Commandos," about a cigar-chomping noncom who led an ethnically-integrated squad of special forces soldiers.  It achieved some success (the title lasted from 1963 to 1981, although it consisted only of reprints after 1974).  So in 1965, Kirby and Lee copied the U.N.C.L.E. formula by taking the Sixties version of Fury (in his forties, with salt-and-pepper hair) and made him the head of the Marvel Universe's version of U.N.C.L.E., S.H.I.E.L.D. Lee and Kirby did some issues of the S.H.I.E.L.D. strip in STRANGE TALES (the Marvel comics of that time often carried the titles of former monster comics, due to postal regulations limiting the new titles that could be offered), and then passed it off to others.  While their version played like an updated version of the Howling Commandos comic (complete with other middle-aged "Howlers" joining Fury in his antics), the series did not catch fire until a young writer-artist-entertainer-entrepreneur named Jim Steranko became the writer-artist on the series.

Steranko's work on the feature -- in the remaining issues of STRANGE TALES, and then the first few issues of a Nick Fury comic -- were spectacularly entertaining, setting standards for art and excitement in comics that have rarely been equaled. Although relatively few comics fans today have read a Steranko S.H.I.E.L.D. comic, his work was likely the reason that the concept hung around after the Sixties -- that, and the utility of having an international spy group in the Marvel universe that could readily supply supporting characters when needed. Hence, while the U.N.C.L.E. series faded away, never to return except for a 1983 TV movie, S.H.I.E.L.D. stuck around.  It even made its way to TV in the late 1990s, when a spate of Fox pilots included one for a Nick Fury and S.H.I.E.L.D. series starring none other than David Hasselhoff as Fury. 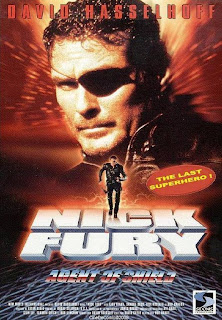 It didn't sell.  Imagine that. Nevertheless, S.H.I.E.L.D. proved such a useful concept for a universe of superheroes that when Marvel started its own movie studio, it used the organization as a plot element in its wildly-successful IRON MAN film, capping the movie with Samuel L. Jackson's post-credits appearance as Fury.  It wove S.H.I.E.L.D. through its successive films, using it to bring the Iron Man, Captain America, and Thor movies together, culminating in 2012's blockbuster AVENGERS -- er. MARVEL'S THE AVENGERS -- movie.  That flick introduced the S.H.I.E.L.D. jumpsuits so well known to comics fans, along with the spectacular vehicle Jack Kirby created back in the very first  S.H.I.E.L.D. story, the Helicarrier. 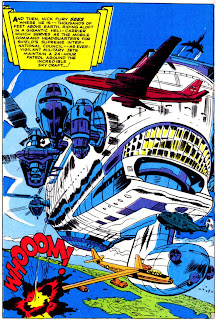 And now, thanks to the success of THE AVENGERS, Joss Whedon, the TV impressario who wrote and directed that movie, is bringing "Marvel's Agents of S.H.I.E.L.D." to TV.  Specifically, the now-Disney-owned Marvel Studios is bringing the Disney-owned series adapting the Disney-owned Marvel Comics property to Disney-owned ABC.
Thus do derivations of derivations of derivations -- British spies, World War II noncoms, super heroes, spy organizations with acronyms -- intersect and breed and result in what looks to be a pretty entertaining series for the 2013-2014 fall season.  From Agent Solo to Agent Coulson, from James Bond to Joss Whedon, it's all about heroic folks and high-tech toys and high-stakes battles for the safety of the world.
Perhaps it's best to ignore the sources, and just enjoy the result.
Posted by Danny Barer at 5/18/2013 12:23:00 PM

I understand a movie version of Man From Uncle is coming out. Tom Cruise is said to be interested in the lead role.

Were I to remake Man from UNCLE, I'd pick Robert Downey JR. as Solo and Matt Smith as Ilya Kuryakin.

Why Matt Smith? Is he Eastern European?