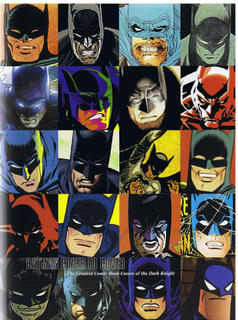 The summer movie season has given me two extremely different superhero movie viewing experiences in the span of a week. On Saturday, June 18, I watched Batman Begins on the Imax screen at the Bridge Cinema in Westchester. And today I watched a matinee of Shark Boy and Lava Girl in 3-D, again at the Bridge (albeit on a normal-sized screen).

The movies were literally night and day. I can't imagine watching the Batman movie as a matinee; it was of the night and for the night. Sharkboy, on the other hand, was such a perfect matinee movie that it's hard to picture donning 3-D glasses at 10 at night and watching it.

Batman is squarely aimed at teens and adults, with its intense pace and images. (But I note that unlike its 1989 predecessor film, Tim Burton's Batman, this one was essentially free of swearing, and featured a Batman who was [eventually] loathe to take human life. In that way, it's perhaps more kid-friendly than the Burton flick.) Shark Boy belongs squarely to the camp of kids films (although kids in their 40's, like my wife and me, can certainly enjoy it.) Shark Boy also contrasts sharply with writer-director Roberto Rodrieguez's other 2005 movie, Sin City -- which assuredly wasn't for kids.

Further, while Batman focused on a particular era's version of a particular character (that is, the version of Batman popular from the mid-eighties to the present), Shark Boy tries to boil down the wish-fulfillment essences of superhero comics, by filtering a Wizard of Oz type story through the tropes and dialogue of a comic-book plot.

Both films succeed admirably at what they set out to do; and more important, manage to entertain while they do it. They show that the keys to a solid comic-book adaptation film (or in the case of Shark Boy, an adaptation of a comic book that was never made) are the keys to any film: solid direction, good acting, and a story that doesn't insult the intelligence.

The question of fidelity to the comic book original is an interesting variable. Rodrieguez's Sin City, of course, was an attempt at the most faithful comic-book adaptation ever made, with the creator of the comic as co-director and layouts that mimicked the panels of the comic. But fidelity to a character like Batman is a relative thing: with so many versions of the character over his 66-year history, one cannot criticize the movie for coming up with, for instance, its own version of what happens to the murderer of Bruce Wayne's family; the comics themselves have changed that backstory several times. It's more important to isolate whatever there is about that character that grabs people, that endures throughout the different versions; and then make sure that essence comes across in the film.

Batman Begins does that spectacularly. It highlights the human vunerabilities of Bruce Wayne, which are not the weaknesses but the strengths of Batman. This is not the automaton-of-justice Batman, shorn of feelings; or the campy boy-scout-leader other extreme of the character. This is a man who is driven by guilt and anger, and is channeling it into helping others in a way that only works in fictional works like Zorro, The Green Hornet, and this one: dressing up in costume and acting as a vigilante. The trick of any superhero movie is to create a world where that choice appears to be not only a believable one, but the most logical one. That is where Batman Begins succeeds best.
Posted by Danny Barer at 6/26/2005 04:02:00 PM

I saw "Batman Begins" and really enjoyed it. I thought that it got a little too complicated though. I really liked the character that Katie Holmes played.