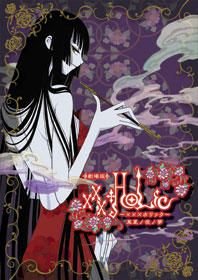 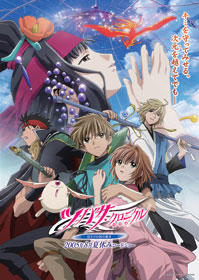 I've always enjoyed TV-show crossovers, where the characters from one show a production company was doing appeared on another. Examples include the characters from ABC's drama-comedy THE PRACTICE appearing on Fox's comedic-drama ALLY McBEAL, or the Green Hornet appearing on the '60's BATMAN series, or the paramedics from Jack Webb's succesful EMERGENCY! series appearing on Webb's one-season-wonder SIERRA. Then there were the multi-part crossovers in the Hickoverse between the BEVERLY HILLBILLIES and spinoffs PETTICOAT JUNCTION and GREEN ACRES.

Anyway, what brought this to mind is that the hugely-succesful group of Japanese female manga creators, CLAMP, began a cross-over experiment a couple of years ago, intertwining the plot lines of two very different comics series they created: Resevoir Chronicle Tsubasa, an action-filled trip through multiple dimensions starring slightly different versions of characters from past CLAMP features; and XXXholic, a gothic monkey's-paw/GREMLINS type series involving a beautiful witch who runs a shop that gives people whatever they wish -- but extracts a commensurate price.

Animation house Production I.G. continued this experiment when they released separate feature films last month based on both Tsubasa and XXXholic: even though the films feature original stories, their plots cross over with each other. Here are links to their English-language websites for Tsubasa and for XXXholic.