Anime Expo: This Year in Long Beach; Next Year in LA 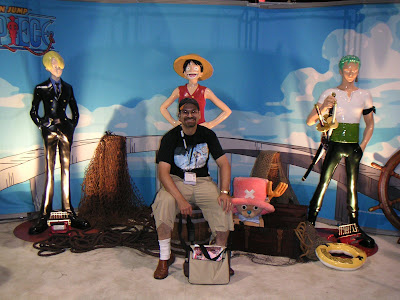 From Friday through Monday, I took off time from work and participated in Anime Expo, the largest anime convention in America (44,000 attendees this year!) and the main one here in California. After a few years in Anaheim, the Expo returned to the Long Beach Convention Center, where it was last held in 2002.

I have bad memories of that 2002 Expo. We went one day -- the last day of the event -- and only went to the dealer's room (which they call the "Exhibit Hall." I miss the days when a convention's dealer's room was called the "huckster's room."). We waited in the hot sun for an hour to get into the room, then could only spend a few hours before the Expo closed.

This time was much more fun. The Expo had the entire convention center, including the outbuildings -- the Terrace Theatre, and the 6,000-seat Arena (the big round building with the whales painted on it). There were numerous restaurants around, particularly across the street at The Pike shopping center. I even found cheap open-air parking ($5 all day). 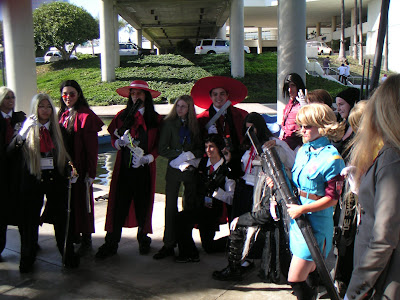 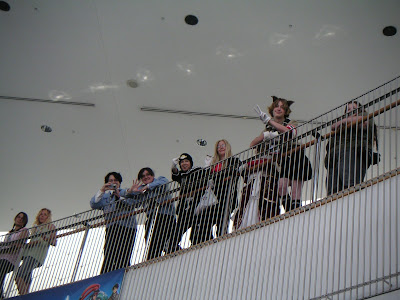 Another fun part was that this was the first Expo where we knew several attendees. Amy has been contacting fellow fans of her favorite anime/manga, Hellsing, on the Cosplay.com forum; and some of them have even come to LA and visited our house. We therefore had pals (in addition to our old friends Don and Pam) to go to events and meals with. Shout outs go to Christie, Natalie, Laurid, Logan, Brandy, Sarah, and a bunch of other people. 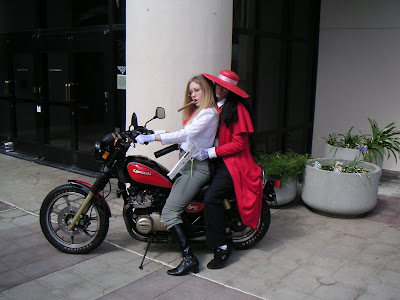 Amy's activities (and thus to a great extent mine) centered on various costuming events concerning Hellsing. There were photo shoot gatherings of folks in Hellsing costumes on Friday and Sunday. Amy was particularly instrumental in setting up a morning gathering on Sunday, held at the Starbucks in the Renaissance Hotel. There is an outdoor patio there, so Amy brought her Kawasaki Motorcycle for people to pose on; and several of the costumes, including Amy's that morning, revolved around a "Hellsing's Angels" theme. As my photos show, the motorcycle was a big hit. 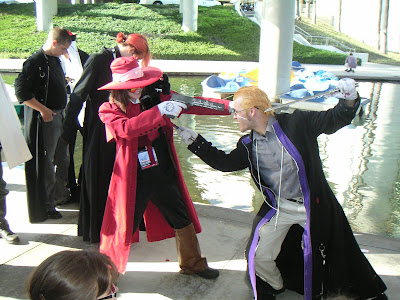 Geneon, which is releasing the Hellsing Ultimate OVA DVDs in Japan and the US, helped the festivities with a marathon showing of the three OVAs which have been released (including a subtitled version of Volume III, which was released in Japan just three months before); a panel of the American voice actors; and a fantastic booth, made up with the giant chair the main Hellsing character, Alucard, lounges in during the second OVA's opening scenes.

Another nice part of the Long Beach location was its proximity to the Queen Mary and its hotel. Amy and I stayed two nights in a stateroom at the QM, which was okay as a hotel but terrific as an historical location.

Problems with the change in venue included unfamiliarity among the staff on the convention center's layout; often uncooperative hired security; delays in events that sometimes lasted several hours; and a terrible screw up with the anime music videos event that resulted in only seven out of 35 AMVs being shown -- after people waited over two hours to get in. (The remainder were purportedly purloined from the MC's laptop bag. Backups would have been a good idea.)

Next year's Anime Expo will be held at the LA Convention Center. That's great for us, since it's just a clear shot down the freeway. But it won't be so good for out of towners, who'll have a choice of the somewhat run-down Holiday Inn across the street from the center; the Wilshire Grand, four blocks away (posh, but one hopes they will have a convention rate); and other hotels that aren't within driving distance.
A link to my other photos will be up shortly.

We had a great time, and it was good to see you guys too. This was our first year attending the Meet the Guests reception, but it will definitely not be our last (i.e. we loved it; definitely going to be doing that again next year.)

The switch in venues might actually be a good thing. A friend of mine who attended the Star Wars Celebration IV (which was held a month or two ago I think) at the LACC said that it handled huge crowds of rabid Star Wars fans (many of which were cosplaying) pretty well.

(sorry, couldn't resist, plus I got that song stuck in my head)