My bike ride today brought me to the recently-opened Funnel Mill Rare Coffee and Tea at 930 Broadway, Suite A, in Santa Monica. 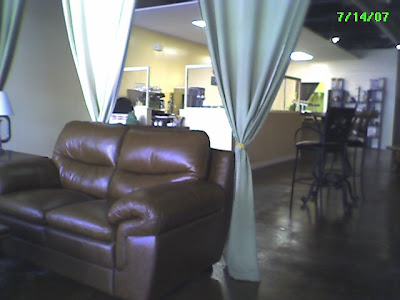 This place is like no other coffee house I've ever seen. It's in a large, airy room, with tastefully chosen art, strategically-placed coffee and tea apparatus, and eclectic furniture. Unlike the normal coffee house's thrift-store-chic furnishings, the furniture here is upscale; the front room has comfy saddle-leather sofas and chairs. New-agey Asian music plays softly in the background.

The main attraction, however, is the coffee and tea selection. Funnel Mill features siphon brewing, like nearby Cafe Balcony; but unlike Balcony, it has over 200 varieties of coffee available. These range from the $3 a cup house blend (which I had -- it was terrific) to the Moet & Chandon of coffee: Kopi Luwak from Indonesia, which retails for $60 a cup or $450 a pound! Kopi Luwak is infamous for its origin (bizarre enough to rate mention on an episode of CSI): It is processed through the digestive system of a civit-like animal called a Paradoxurus. That's right, the felines eat coffee berries and, er, excrete them whole. The resulting coffee is said to be magnificent. If you've got a stray $60, maybe you'd like to try it. 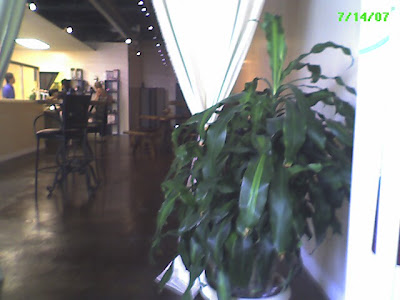 The service is also excellent. When the owner saw that I was stacking my backpack and the material on which I was working on the table next to my chair, he brought over another chair to stack my stuff on so that the table would be free for my beverage.

Another bonus is the bike lane that runs on Broadway from about Ocean to Centinela --allowing easy access by bike.

The only criticism I have is the paltry baked goods selection -- seemingly only an afterthought for those who demand pastry with their coffee. I advise folks to first get breakfast at the nearby Swingers or Jinky's, and then settle down at Funnel Mill for an apres-breakfast beverage treat.