Of all the Batman collectibles in my collection, this is definitely the one that I've owned (or that has at least been in the family) the longest: a pillowcase with a print made up of Batman characters, sound effects, and the Batmobile. 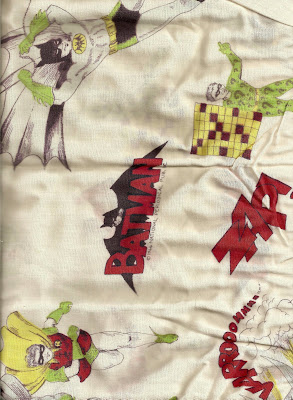 Although, like most 1960's Batman collectibles, the pillowcase is copyrighted 1966 and was released as a piece of merchandising for the TV show, the artwork is done more or less in the style of the comic book, rather than the show. At ;east some of the art is traced from comic-book art; the shot of the Riddler holding a crossword puzzle as a shield, for instance, is a poorly-done trace of a splash page published in Batman # 179. 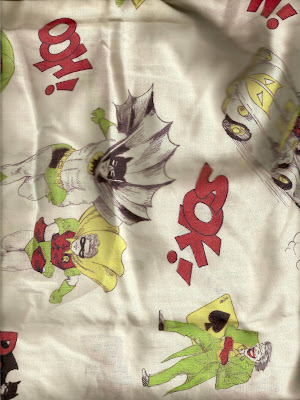 I don't know if this pillowcase was purchased for me or for (more likely) my brother Michael, but it graced my pillow many times when I was in single digits. Who knows how many dreams it influenced
Posted by Danny Barer at 7/22/2007 02:49:00 PM

Email ThisBlogThis!Share to TwitterShare to FacebookShare to Pinterest
Labels: Batman