A Festival of Heat and Words

Both days were marked by heat that set a few minor records (and fueled some wildfires elsewhere in So Cal). 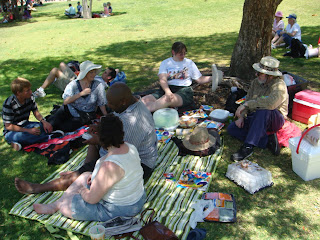 We set up on the grassy hill next to the Janss steps; and fed on baked chicken, fruit, veggies, cake, and Japanese canned teas. One of the advantages of holding the party at the Festival was that folks who never make it to my parties (because they're too busy with the festival) were able to attend.

Today, Amy had work so I bicycled over to the Festival by myself. The road from our neighborhood to UCLA is all uphill, so I rode up there in the morning, before the heat became too unbearable. (Then, when I returned later in the day, it was all downhill).

At 11 am, my family laid claim to two booths at the festival. Cousins Linda and Karen signed their new visual-journaling book at the Borders Booth: 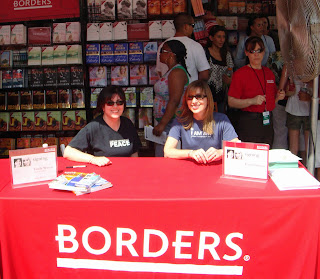 while their brothers, Tod (caught in mid-conversation) and Lee signed at the Mystery Bookstore booth: 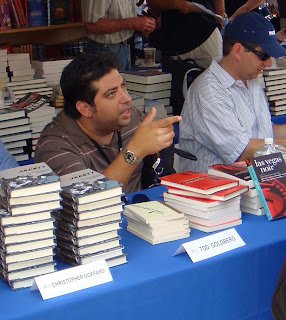 After their respective booth duties were completed, I joined the cousins (along with Lee's cute daughter Madison) and headed lunchways. Lee and his daughter took one look at the lunch line and peeled off to grab a burger. I ate with the rest of the family. We discussed such topics as Linda's new iPhone, Karen's walking boot, and an annoyed e-mail Tod received from Dr. Laura triggered by a blog post wherein Tod questioned whether the good doctor was indeed a doctor. (Bottom line: She is.)

After lunch, Tod moderated a panel on "Mystery: Crime with an Edge," at which Tod and fellow crime writers discussed the delights of delineating the dark denizens of the demimonde. 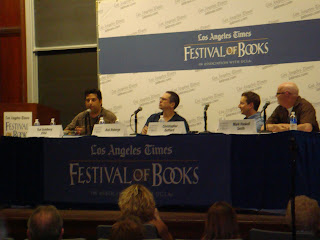 Comic books and graphic novels had a larger-than-usual presence at the Festival -- likely a result of the onslaught of comics adaptations on the silver screen. At the Kinokuniya Books/Tokyo Pop booth, I ran into one of my favorite comics creators, writer/artist Wendy Pini -- dolled up in clothes that may have been a liability in the 90-degree heat. 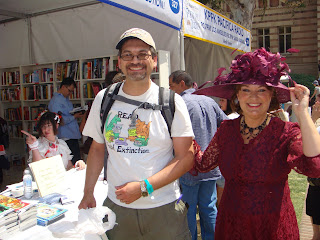 In the background of the photo is Aimee Major Steinberger, an animator who wrote and illustrated a hilarious and beautifully drawn travelogue of her trip to Japan: JAPAN AI -- A TALL GIRL'S ADVENTURES IN JAPAN. (Ms. Steinberger is 6 fee tall.) I bought her book; and quickly read it after returning home from the festival. She depicts in the book several of the places we visited and things we saw during our two trips to Japan, including the Animate Store, Sakura Cafe and Milky Way Cafe in Ikebukuro, Tokyo; the shops in Harajuku; and the Kiyomizu Shrine in Kyoto.

I finished my visit to the Festival with a trip to the Hi-De-Ho Comics booth, where I found Phil Yeh. I've known Phil since I met him at the 1982 Norwescon in Seattle. He introduces me variously as his fan from Walla Walla; as his oldest fan; and as one of his 33 fans worldwide. He's the artist who drew the T-shirt I was wearing that day. (Other folks asked how they could get the shirt. The answer: They can't. It's 18 years old.)