Anime Expo 2009 took place at the LA Convention Center from July 2 through July 5. A number of portents could have justified an attendee in suspecting that this AX would be a subdued one, if not an odd one. The economy is in a doldrums. More specifically, the entire DVD industry, and in particular the US licensing of anime for DVD, has taken a nosedive since AX 2008. That was evident in the dealer's room (or, as the organizers called it, the "Exhibit Hall"). AX dealer's rooms were once dominated by Bandai's, Geneon's, ADV's, and Tokyopop's giant booths. This time, the only companies that displayed large booths were Funimation (the blood-streaked survivor in the licensor battles), Crunchyroll (the vanguard of anime's future: online distribution), and the company that will put out the computer-animated ASTRO BOY and GATCHAMAN feature films. Geneon USA has been out of commission for a while (except as an adjunct to Funimation); and Bandai, ADV and Tokyopop did not even have booths. Further, while booth after booth sold character goods and fashion items, few booths actually sold anime dvds.

So, did the Expo fall flat?

The attendance was 44,000 -- a record. And everyone there seemed to be having a great time.

A billboard on the side of a building just north of the convention center gave a hint that the anime-related video game industry, at least, is doing well:

And as usual, a huge number of fans came in astonishingly-detailed costumes.

Although Thursday was mainly devoted to greeting friends, getting event tickets, and haunting the dealer's room, I received a surprise Thursday evening, as I, Amy, and friends were returning from dinner to the Convention Center. A detail of LAPD officers were guarding the front of Staples Center, which had just been announced as the site for the Michael Jackson Memorial. As we walked past a group of officers, one of them appeared to be paying unusual attention to us. Then one of them detached from the group, walked toward me, and called, sternly, "Mr. Barer." I obediently halted. The officer grinned at me, and I saw that his nametag read "Riddick." I suddenly realized that the officer was David Riddick. David, in addition to being one of the pioneers of licensing uncut anime for American video distribution, was a good friend of mine in the Cartoon/Fantasy Organization back in the mid-80's. He recognized me because he had read -- yes -- this blog. (Hi, David.)

On Thursday, we got tickets for my favorite AX event: The Meet the Guests reception, this year held as a Friday breakfast at the nearby Bonaventure Hotel.

For the first time, I went to one day of the AX wearing a costume -- a steampunk outfit. Since the Steampunk photo gathering was set for Friday, I went to the Meet the Guests Reception wearing the outfit. Amy wore her own Steampunk ensemble. Here's a photo of us, from The Manticore Society blog: 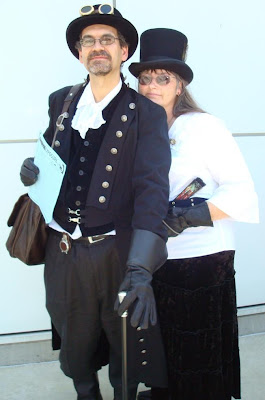 The outfit drew unexpected praise from Yasuhiro Nightow (the creator of the manga TRIGUN) and Takashi Okazaki, the creator of AFRO SAMURAI. The MTG reception remains the best way to meet and talk with the guests one-on-one, and hear such interesting stories as Okazaki's delight that the English voice casting for the Afro Samurai movie featured not only Samuel L. Jackson (the voice for Afro in both the movie and TV series) but also Mark Hamill -- two jedi in one cast!

The steampunk photo shoot later that day was delightful. A lot of folks showed up, many carrying ingenious DIY-type inventions. Here's a photo from the blog HOW A GIRL FIGURES: 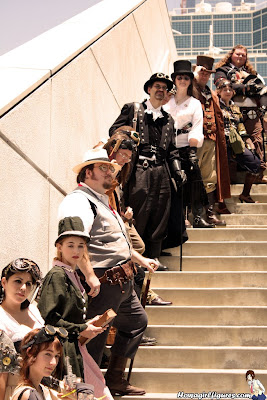 On Friday night, we went to the Anime Music Videos. I was amused by the sign outside the video hall that forbade photography or video of the AMVs. The AMVs themselves are copyright-infringing compilations of anime (and sometimes videogame) clips set to music, by creators who don't have the rights to use either the clips or music. They are tolerated by the rights holders, because they are generally a good promotional tool for the source material. But for these infringers to sternly warn those who would copy their copies was rather ironic.

Saturday was a big day for photoshoots gatherings. There was a gigantic one for Kuroshitsuji, or "Black Butler." During our 2007 trip to Japan, Amy picked up the first volume of this manga because she enjoyed the art. At that time, almost no one in the U.S. had heard of the property. Neither the manga nor the anime tv series that adapted it has been licensed in the U.S. Yet due presumably to pirated fansubs of the anime, the property has picked up numerous fans, as the photogathering showed. LA Weekly wrote up the phenomenon

Early that evening was the first Hellsing photo shoot Amy was dressed up for it, as usual.

Although there has been a long pause since the last Hellsing video (Hellsing Ultimate 4) was released in the US -- apparently because the negotiations are still on for the licensing of Hellsing Ultimate Volume 5 -- the gathering drew a large, enthusiastic crowd.

After the photoshoot, we planned to eat with friends at the Rock'n'Fish at the L.A. Live complex, which featured a special $9.95 entree menu for AX members. Two of us went there in advance, got there at 6:45, and were informed the joint was closing at 7 pm due to slow business. We managed to persuade them that our party was going to get there before that for dinner, and would make it worth their while. That turned out to be fortunate for the restaurant; by the time it got there our dinner party totaled 14 people.

On Sunday, we went to a panel that featured the creative staff of Adult Swim's hilarious stop-motion animated series ROBOT CHICKEN, including creative force and actor (memorable in both the BUFFY TV series and the AUSTIN POWERS movies) Seth Green.

We ended the day with a second Hellsing photoshoot, this one outdoors.

Amy dressed up for this one too -- and recreated a scene from the final chapter of the Hellsing manga.

We ended the convention by entertaining a group of friends at our house -- who left just as I had to prepare for my court appearance the next day.

Email ThisBlogThis!Share to TwitterShare to FacebookShare to Pinterest
Labels: AX 2009

I liked it.
Bathmate