A Double Dose of Ditko

This past week I picked up two books issued this year that celebrate some of the more obscure work of Steve Ditko, co-creator of SPIDER-MAN and one of the most individual stylists in mainstream comics. 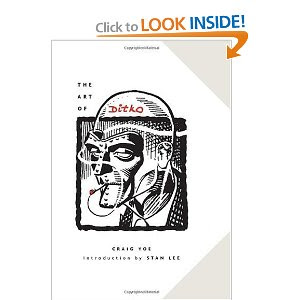 THE ART OF STEVE DITKO (http://www.amazon.com/Art-Steve-Ditko/dp/1600105424/ref=sr_1_2?ie=UTF8&s=books&qid=1272835924&sr=1-2) is a beautifully-designed book, created by graphic designer and comics historian Craig Yoe, that reprints Ditko stories done for Charlton Comics in the '50's, '60's and '70's in oversized color format, combined with key Marvel and DC comics pages shot from the original art and essays from the likes of Stan Lee and John Romita.
Althoug the title is misleading, in that it's not really a thorough survey of Ditko's art, it's a great volume at quite a low price for such an impressively-put-together hardback 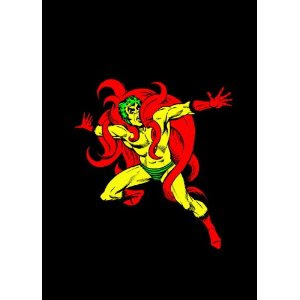 THE CREEPER is a collection I didn't think I would see. It's a hardcover compilation (on rather cheap paper, unfortunately) of one of the few superheroes Ditko worked on at DC Comics. There's little to set the Creeper apart from other superheroes in regards to powers -- he's superstrong, and can change in and out of his secret identity by pushing a button -- but he still stands out as aggresively weird. After all, his costume consists of a yellow body stocking, green briefs and wig, yellow makeup, and a red sheepskin rug around his neck; he creeps around, using the type of bizarre body language that highlighted Ditko's work on Spider-Man; and he tries to creep crooks out by talking weird. That's enought to support a short-lived comics series in the late sixties, and some backup strips in the seventies. Despite the shortcomings, the stories are memorable; and having them all in one volume is an unexpected delight.
Posted by Danny Barer at 5/02/2010 02:33:00 PM

Email ThisBlogThis!Share to TwitterShare to FacebookShare to Pinterest
Labels: Ditko