The Taylor and the King 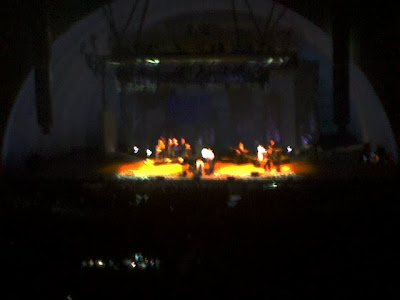 The Los Angeles Times dinged the Hollywood Bowl concert last week by James Taylor and Carol King as tired and uncreative. It's a pity that the concert the reviewer wanted to see wasn't the concert that the two performers delivered, because Amy, I, and the rest of the folks in the sold-out Bowl concert on Friday had a terrific time. Some folks are annoyed by aging rockers; but I'm impressed by voices from my past that can still deliver the goods. Carol King's voice may not be as strong as it was 40 years ago, but she still sprints, dances, and Loco-motions across the stage with amazing energy and agility for someone who started writing hit songs in the late 1950's. Taylor's voice and guitar playing are still as smooth as fine bourbon, and both can still mesmerize an audience. A particular treat was a duet by the two on "You've Got a Friend," the song King wrote that produced separate hit singles for King's and Taylor's versions.

With this concert, and the Eagles concert last month, we've had two great Bowl experiences before the official Bowl season has even started.
Posted by Danny Barer at 5/16/2010 03:45:00 PM

I hope that the keep up the bad reviews because it may make it easier to get tickets!

Here is Ken Levine's review, seemingly a little kinder to the dou.

I have been a big James Taylor fan for years. This man can sing better than almost anyone I have seen. James is really my most favourite singer in the last 40 years. I’ve never miss any of his concert, even James Taylor Tickets were the best sellers. I miss carly and him singing together.