Another Challenge for the Green Hornet 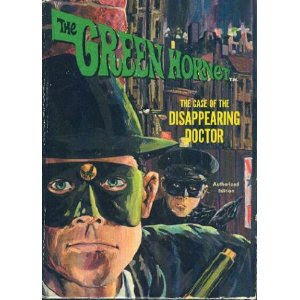 As a compromise, it's not that bad.

The GREEN HORNET movie that debuted Friday was the culmination of a decades-long push to make a movie based on this radio-show hero created in the 1930's. The challenges were understandable. Apart from various comic book appearances in recent years, and a scene in the 90's biopic about Bruce Lee, the Hornet has been absent from popular media since his ill-fated 1966-67 TV series. That he remains known at all by people who are not old-time-radio cognoscenti probably results from that sixties TV series -- my favorite incarnation of the character -- which, while hampered by low budgets, a half-hour format that pretty much prevented any character development, and a serious tone that bucked the campy superhero vibe of the day, still had style to burn, cool threads, some nice noirish mise en scene, and Bruce Lee as Kato. Other pluses are the unique concept that the Hornet is a hero posing as a gangster (which probably worked best in the thirties) and the Hornet's status as a major influence on that other pulp-fiction rich guy who rides around in a fancy car with his sidekick, wearing a mask, and dealing out late-night justice.

And I've got some emotional investment in this property. When I was a little kid, the TV series was playing in syndication; and for some reason, I was obsessed with it. I read over the Whitman novelization of the TV series. I sought out whatever merchandising I could find from that over-merchandised series. I played with Green Hornet bendy toys and threw a fit when I lost them. I ran around in a Green Hornet sweatshirt and my dad's hat, wielding a black plastic squirt gun as my Hornet Gas Gun. Years later, I watched episodes of the series; and while I cringed a bit at some of the cheap production values, I found them stylish and fun -- particularly Bruce Lee's fight scenes.

Which brings us to the compromise in question: The new GREEN HORNET movie.

The movie is plainly based more on the sixties TV series than the radio show (although in an early scene the Hornet and Kato wear outfits that suggest their '30's incarnations). We have the '65 Chrysler Imperial Black Beauty (which lives up to its name), the sixties costumes (which look rather retro now), D.A. Scanlon (a decidedly different character than his sixties character, who was a mentor to young Britt Reid and the Hornet's "inside man") and Lenore Case, Reid's blonde secretary (whom Cameron Diaz plays with particular snap and a great deal of tolerant patience). We've also got the elements the series carried over from the radio show: The Daily Sentinel newspaper (here depicted as housed in the CAA building in Century City), supposedly a family-owned major newspaper in Los Angeles not affiliated with a conglomerate (now there's a fantasy element); Mike Axford, an Irish reporter in the radio and TV series, now an editor played by Edward James Olmos; and a theme of Britt Reid trying to live up to his father's example.

The best new thing the movie brings to the party is the updated Kato. In the TV series, it was clear that Kato was the better fighter of the pair, and had so much to offer that his role as Reid's valet and chauffeur seemed demeaning even as a cover for his true job. Here, Kato is depicted as a real person, much (much much much) smarter than Reid, and actually the lead in the partnership. He also has feat of clay, including his machismo and frat-brother attitude that alternatively draws him into collaboration and conflict with Reid.

The movie also brings money -- money to create set pieces that the TV series could only dream of. We don't have to deal with "midnight" scenes that were plainly shot in sunlight, or the massive use of repeated stock footage, that the TV series used to stay within budget. Plus, the director brings a certain style to the proceedings that I prefer to some of the blurry-shot action scenes in recent movies.

The weak point is the Hornet himself -- at least, as portrayed by Seth Rogen.

Apparently, Rogen is the compromise. The only way this long-gestating project could see the light of day was for writer-star Seth Rogen to bring his fans (of which I am not one) by depicting Britt Reid as Seth Rogen's standard screen persona. That is, rude, clueless, and deliberately, achingly, stupid. I say "deliberately" because Rogen's Reid starts out the movie as a self-made idiot playboy (supposedly his rebellion against his emotionally abusive father), the son of a newspaper publisher who has never read a newspaper all the way through. And throughout his character arc, he . . . never improves. Even though he places himself in a situation where he needs quick wits to stay alive, he does nothing to quicken his wit. Even the scene in which he puts all of the clues together (accompanied by one of the most unnecessarily arty montages you'll ever see), the movie emphasizes how stupid he is.

Now, the Hornet was not necessarily a complex character, either in the radio show or in the TV series. So the filmmakers had some broad character outlines to fill in. But as opaque as Britt Reid/the Hornet were as characters, the one aspect of both that could not be denied was their intelligence. Reid was young in the TV series, and was constantly compared to his father, but he was plainly a sophisticated businessman who was always on top of his job. Despite his extracurricular activities, his role as a publisher was not just a blind; his journalism was another weapon in his war against gangsters or racketeers. Indeed, the radio Green Hornet often went after crooked businessmen, a task that demanded Reid's business acumen. As for the Hornet, he played a vital role in the crimefighting team: He was the one who came up with the plans and strategies, and who carried them off with the sangfroid that allowed him to swagger into a room of thugs wearing a mask and an attitude.

Moreover, intelligence is simply a prerequisite for a hero such as the Hornet, who doesn't rely on superpowers or bullets (well, at least the non-movie Hornet stays away from the bullets). You can have a hero who isn't musclebound, or who doesn't have the best fighting skills. But you cannot have a private-eye-type hero like the Hornet who isn't smart. Indeed, it's difficult for any hero to function without intelligence, unless he's the Hulk. (Who's also green.)

Email ThisBlogThis!Share to TwitterShare to FacebookShare to Pinterest
Labels: The Green Hornet

This bring back memories.

When you lost them which you seemed to on a regular basis you went through Green Hornet Gumby withdrawel agonies so a replacement would appear.

Ironically, in the first scene of the new Green Hornet movie, young Britt Reid watches in horror as his father tears the head off Britt's favorite action figure. This is supposedly the most traumatic event of little Britt's life. I'm glad I have a much better father than that. Obviously that's why I turned out better than Seth Rogen's character.

I would think that Josh Brolin would make a better Brit Reid/Green Hornet.
By the was the original actress portraying Lenore "Casey" Case passed away years ago.