Evangelion: You Can (Not) Angst

Back in the fall of 2007, we were privileged to see EVANGELION 1.0: YOU ARE (NOT)ALONE in a theater in Ikebukuro, Tokyo, in Japanese sans subtitles. 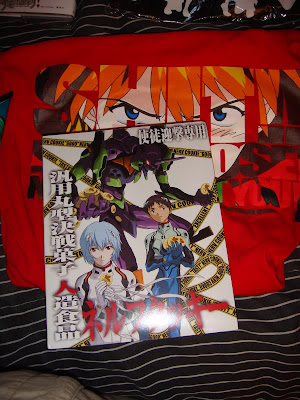 The American anime licensing market has greatly diminished since that time; but I'm pleased to report that it is still mighty enough that this afternoon we had the opportunity to see the second chapter of the big-screen retelling of the Evangelion anime series, EVANGELION 2.0: YOU CAN (NOT) ADVANCE on the big screen at the Independent Theater in Downtown Los Angeles. 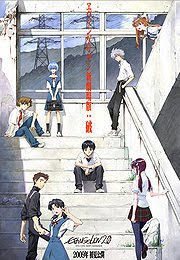 Seeing well-done anime on the big screen is generally a treat. And for a movie like this, which combines terrific character designs and giant armored organic warriors with fantastic redesigns and high-impact direction, there's no better place to watch it.

The story is, in some ways, the same strange amalgam of post-apocalyptic/pre-apocalyptic science fiction, study of teenage loneliness and neuroses, goulash of Judeo-Christian concepts, and eye candy that the TV series was, albeit writ larger and tweaked a bit with some rearrangements of events and at least one new character. I'm interested in seeing where the creators ultimately take the story, considering that we've had multiple endings before (one weird low-budget one for the TV series, and two previous movies that offered an alternate ending).

In any event, if you're interested in seeing some spectacular examples of Japanese animated science fiction, or if you'd like a look into the show that has been the epicenter of anime fandom for the past 15 years, I recommend watching the two Evangelion movies, either in theaters (if you can) or on DVD or Blu-Ray. Be warned: It's not for pre-teens; and there will be some images you will find hard to get out of your head.
Posted by Danny Barer at 1/29/2011 10:20:00 PM