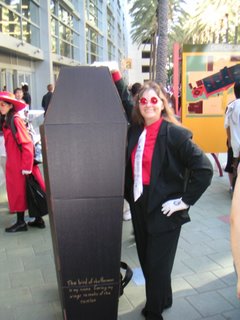 From July 1 through 4, 41,000 anime fans (including Amy and me) filled the Anaheim Convention Center for the 15th annual Anime Expo, America's premier anime convention. Since I had a four-day weekend, for the first time I attended all four days -- and had a blast. Highlights:

-- Obtaining con badges went far more smoothly this year than last. The con mailed out badges, and pre-registered attendees simply picked up their badge holders at the con. Amy grabbed ours Friday in a fraction of the time it took her last year to pick up the badge.

-- The biggest draw of this year's Expo was the first American appearance of CLAMP, the four-woman manga-creating team that is among the most prominent comic creators in the world. I was concerned that I would not be able to get in (4,500 person capacity in the grand ballroom, and probably a majority of attendees who wanted to see CLAMP -- do the math), but I got into line at noon for the 2 pm panel (which ended up happening at 3:15 pm) and got a couple of nice seats in the front half of the room. The ladies themselves were only there for about a third of the panel's time-slot. They presented a self-produced 20 minute promo film about their works (slickly made, and professionally narrated in English), which described each of them in terms reminiscent of Charlie's Angels: "The lovely ...." "The stylish ...." "The brilliant ...." etc. They also presented clips (not a full episode, as advertised) from the TV series based on their TSUBASA:RESERVoir CHROnICLE manga, which Funimation has licensed for US production. Colleen Clinkenbeard, the voice director for the American dub of the series, moderated the panel. The CLAMP ladies themselves were charming, if a bit nervous. They presented a slideshow of their respective work spaces, including comments on which ones kept neat spaces and which ones were messy. One of the tidbits they revealed was that even though they work without assistants, they produce manga at a blistering speed: the scriptwriter of the group takes 8 hours to produce a script for a 20-page installment of one of their series; the group spends 12 hours producing a storyboard for the installment; and then they draw all 20 pages in two days! (By comparison, an American comics artist who produces 3 pages a day is considered fast.) Alas, CLAMP was hardly seen during the convention; besides the focus panel, they only appeared at two autograph sessions on Sunday that could only be attended if you won a drawing. (I didn't win.)

-- Thanks to our friends Don Burr and Pam Gross (who were delightful companions during the Expo), we got both tickets and nice seats for the Anime Music Videos program, one of the most popular features of the convention, where adept fans edit together anime scenes into music videos. Some of them are quite complex, combining characters from different series in the same scene, and coming up with complete original stories. There were definite trends: two of the videos used the song "Ultimate Showdown," and several of them included the same fight scene from the series NARUTO.

-- The soundtrack from AVENUE Q continues to be quite popular with both anime music video creators and participants in the masquerade.

-- My favorite event every year is the Meet the Guests reception, in which 150 fans buy $15 tickets (the proceeds go to charity), eat light refreshments, and get to speak one-on-one with several of the guests of honor. The fans are rotated between the tables, so that they get to speak with as many guests as possible. This year, I got to chat with Noburo Ishiguro, who has been connected with some of my favorite anime over the years. He was interested in the fact that at 41, I was older than most of the attendees, yet watched more anime than ever now. I showed him a picture from a book on MACROSS of him 24 years ago, and commented that we have both changed over the years. (This astounded the translator, who was not even 24 years old!) We had another interesting conversation with Seiji Mizushima, the director of FULLMETAL ALCHEMIST. During a lull in the chat at the table, Mizushima pointed at me and spoke enthusiastically to his translator, who informed me that Mizushima thought my manner reminded him of that of Hideaki Anno, the director of NEON GENESIS EVANGELION. (Although he thought I was better-looking than Anno.)

-- Geneon, which produced the HELLSING ULTIMATE original animation video series, announced at the convention that all of the US voice actors who dubbed the HELLSING TV series -- as well as the US voice director, Taliesin Jaffe -- would work on the dub of ULTIMATE. That was welcome news, since they did a great job with the series. That night, at 11 pm, the US premiere of the subtitled version of ULTIMATE was shown to a packed and enthusiastic room. Amy attended the convention dressed as HELLSING main character Alucard (in the slick business suit Alucard wears in the manga when he travels to South America); and brought a 6 foot cardboard black coffin, painted in gold with the alchemical quote the manga coffin features. She brought the coffin to the video screening; but could not take it to her seat. With the permission of the room operators, she left it propped in a corner of the room, near the water cooler -- where it definitely added to the room's atmosphere.

-- As a late birthday present, Don Burr gave me a cel from the CARDCAPTOR SAKURA series, my favorite anime adapted from a CLAMP manga. You can see a photo of it (along with other photos of the expo) at his Web page. Pam also has photos up.

-- On the last day of the Expo, the celebrity art auction was held. It raised around $21,000 for the Children's Hospital of Orange County. Among the most interesting items auctioned were custom-labeled Anime Expo bottles of water, autographed by the guests of honor. At Don Burr's suggestion, the auctioneer put the bottle of water he was drinking (unautographed) up for auction! It started as a joke, but it ended up going for $20. Don has video up of the event here.

Photos can be found below. As usual with Blogger, they are in reverse chronological order.

You forgot to mention that our hotel room provided storage for said coffin since it was rather large and difficult to lug home every night. We had great amusement in telling our friends, relatives, strangers, etc. that "OMG there is a COFFIN in our room!!!!" :-)

Yes. But Sunday, your room was decoffinated.

Decoffinated Folgers: the drink of choice of vampire-hunters everywhere!!