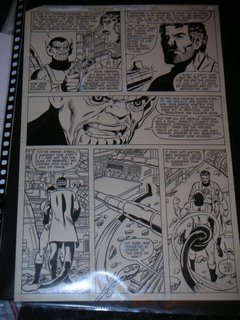 By popular demand (well, actually, a request from Tod Goldberg, but hey, he constitutes about 20% of my blog's readership), here's the original-art page that George Perez is autographing in one of the pictures below. The page itself is around 11 x 17, and thus too big to scan.

This is not the worst page Perez has penciled (he was pretty rough early in his career; he started drawing for comics at age 19), and it certainly isn't the best.

Some historical context: Perez drew this for a FANTASTIC FOUR annual around 1980. He was apparently finishing up various commitments for Marvel Comics before switching to DC comics, where in 1980 his and writer Marv Wolfman's revival of the rather silly 1960's comic TEEN TITANS would catch fire, become a best-seller, and pave the way for the 2001-2006 TEEN TITANS animated series. The page shows Perez's transition; it is drawn on paper DC furnished to its artists.

Doug Moench furnished the incredibly wordy script for the story. Moench was and is a pretty good writer, but he was never appropriate for the FANTASTIC FOUR. His metier was monsters and street vigilantes; he could never master the unique blend of slapstick silliness, gee-whiz sense of wonder, Saturday-morning serial adventure, and melodrama that made FF at its best one of the flagship Marvel comics.

Perez did pretty well with the script; but the relatively stiff posing of the characters on the page (even beyond what's necessary to build the tension for the next page) shows little of Perez's later fluid choreography of literally dozens of characters in comics like CRISIS ON INFINITE EARTHS, TEEN TITANS, WONDER WOMAN, and his late-90's to early 00's run on THE AVENGERS.

But the page has special meaning to me as one of the first original art pages I bought with my high school allowance back in the early 80's. So I was happy to finally get Perez's signature on it. You'll see Perez's signature in the middle panel on the bottom tier.

The Fantastic Four and related characters are trademarks of Marvel Comics; and the page is copyright 1980 Marvel Comics, or whatever the company is called now.