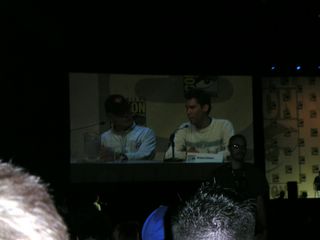 One of the coolest panels was the Warner Brothers presentation in the massive Hall H on Friday morning. Here we see Bryan Singer (right), director of this year's SUPERMAN RETURNS, with Richard Donner (left), director of 1978's SUPERMAN: THE MOVIE. Warner Brothers is putting out a set of the Christopher Reeve movies on DVD. Included will be a cut of SUPERMAN II that consists of the parts that Donner directed. (Warner parted ways with Donner midway into the movie, and hired Richard Lester to complete the movie.) the cut will include about 80% of the scenes Donner shot (the rest have been lost over the years). Donner screened one of the never-before-shown scenes, with Lois Lane at the Daily Planet figuring out that Clark Kent is Superman and testing her theory by jumping out of a skyscraper window. Watching a scene I've never viewed before with Reeve, Margot Kidder, and Jackie Cooper, complete with the music and cinematography of the first movie, was like one of those dreams where you discovery a room in your house you've never seen before.