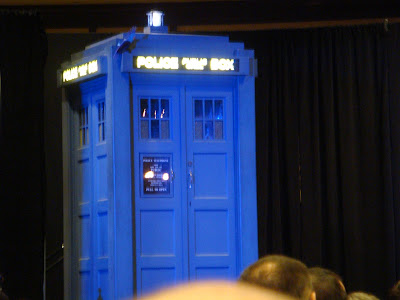 Back in the mid-'90's, we attended a few Gallifrey One conventions, the North American convention primarily devoted to DOCTOR WHO. For the uninitiated, DOCTOR WHO is a British TV series, and the longest-running science fiction series in TV history. The original series ran from the early sixties until the late eighties, a feat it managed in part by inventing the conceit that the lead character -- The Doctor, an alien space-time traveler -- could "regenerate" when he was about to die, resurrecting himself as a different actor with a different personality. As a result, seven actors played The Doctor during the original run. By the nineties, however, there had been no new Doctor Who on the air, save an American TV-movie that ran on Fox in 1996 (in which the seventh doctor regenerated into an eighth, seen only in that special; and Eric Roberts played The Doctor's longtime nemesis, The Master). DW fandom stayed alive, primarily through home video (VHS at that time). But with little new DW material, the portions of the Gallifrey One conventions devoted to DW began to diminish. While the conventions still featured DW actors (including actors who had played The Doctor, others that played the various companions who traveled with him, and still others that portrayed recurring supporting characters), they also featured substantial programming addressing other British science fiction TV series, and even American TV series that resembled the British style of SF storytelling (such as BABYLON FIVE and its spinoffs).
But times have changed. Last weekend, we visited our first Gallifrey One con in several years. Six years before, DOCTOR WHO came back, with the sort of revival fans of classic TV series dream about: a newer, more mature storytelling style; better special effects (through the magic of CGI); and -- perhaps most crucial to the series structure -- charismatic actors, particularly tenth doctor David Tennant (who finished his multi-year stint as The Doctor in 2009). So popular has this revival proved, that it has spawned spinoff series (TORCHWOOD and THE SARAH JANE ADVENTURES) that take the DOCTOR WHO formula in different directions, with TORCHWOOD taking a more mature tack and THE SARAH JANE ADVENTURES going for the child audience to whom the original DOCTOR WHO had been directed.
The result is that the modern Gallifrey One convention is devoted almost entirely to DOCTOR WHO and its spinoffs. And the fans were thronging the corridors. Over two thousand fans attended this year, a record. DOCTOR WHO merchandise -- much of it new -- filled the dealers' room; and fans walked around in costume in numbers seldom seen outside Comic-Con and anime conventions. (See photos here: http://nerdreactor.com/2011/02/25/gallifrey-ones-catch-22-islands-of-mystery/)
A couple of photos that illustrate the range of programming, covering both the original and current series: 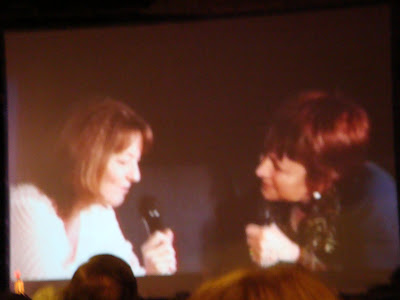 Two actresses who played companions to The Doctor in the early '80's -- Sarah Sutton and Janet Fielding -- reminisced about their time on the series, a time when multiple recurring characters were jammed into short episodes, and as a result development of supporting characters was stunted. Both left full-time acting, and Fielding became an activist for better treatment of women in the industry, as well as a talent agent. We spoke to Fielding at the convention, and we could understand how she would do well as an agent: Not only is she smart and outspoken, but she developed an instant rapport with everyone with whom she spoke, treating them as old friends. 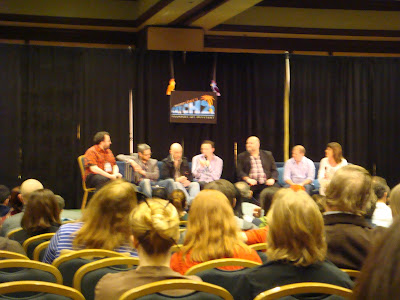 I also attended a panel that featured several of the behind-the-scenes people for the current series -- a producer, a writer, set designers and costumers. One of the major innovations of this series over the previous one, they revealed, was the institution of "tone meetings" -- in which an episode's writer meets with the director and the other creative minds behind the series; explains the tone and mood he or she wants to accomplish; and brainstorms how to bring that vision about.

Much like The Doctor himself, this convention continues on -- by reinventing itself.

Email ThisBlogThis!Share to TwitterShare to FacebookShare to Pinterest
Labels: Doctor Who, Gallifrey One