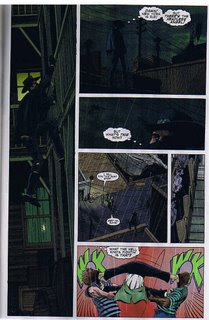 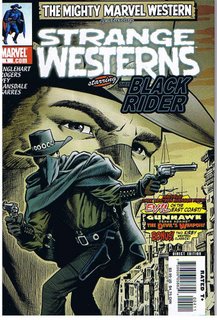 Marvel's western comics thrived in the late Fifties and early Sixties (when westerns thrived in every popular medium), before super-heroes began to beat Marvel's other genres down. Marvel tried reviving them in the early Seventies (primarily with reprints), and has taken occasional stabs at mini-series and the like, if only to keep its trademarks alive.

Marvel's style of western was always dominated by two kinds of heroes: the "kids" (Two-Gun Kid, Rawhide Kid, Kid Colt Outlaw . . . .) and Lone Ranger-type superheroes.
This summer, Marvel's doing a bunch of western one-shots, as part of a Marvel Western Summer Event. An extremely nice entry that came out this week is "Strange Westerns Starring the Black Rider." The Black Rider is a dark vigilante type; and appropriately enough, this story features writer Steve Englehart and artist Marshall Rogers -- renowned for their work on Batman in the mid-seventies -- for a particularly crepuscular Black Rider adventure. In my opinion, this story features some of Rogers' best work in years, harkening back to his adventurous days in the late seventies and early eighties. He combines an amazing sense of atmosphere, his usual skill at architecture, and his fondness for innovative panel layouts and storytelling to create a terrific piece of summer entertainment.

This issue also features a story written by horror novelist Joe Lansdale, and two reprints from the early days of Marvel westerns of stories written by Stan Lee and drawn by Jack Kirby. I can't say the comic is a bargain (it's $3.99, f'r cryin' out loud!), but it's worth checking out.