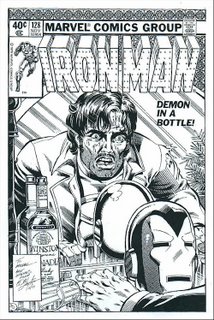 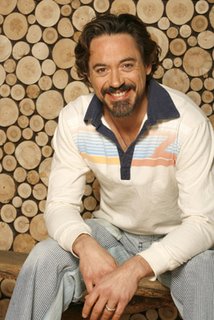 Marvel Comics character Tony Stark, aka Iron Man, may have started out as essentially Howard Hughes with a Clark Gable face; but newly-formed studio Marvel Entertainment may have made an inspired choice for the upcoming Iron Man movie by casting Robert Downey Jr. as ol' Shellhead. (Comics fans may recall Stan Lee's fondness for coming up with nicknames for his characters that included the word "head" -- e.g., Webhead (Spider-Man), Winghead (Captain America), Hornhead (Daredevil). For some reason, though, he never called Thor "Godhead" . . . .)

Stark's original weakness was a piece of shrapnel lodged close to his heart, requiring him to wear his chest armor/iron lung 24 hours a day (fortunately, it could be recharged from wall sockets or car cigarette lighters -- no joke). Eventually, the shrapnel was removed; so to find a new problem for the Golden Avenger, Marvel turned to substance abuse. Beset by stress he couldn't do away with by punching something, Stark turned to the bottle; and he's occasionally relapsed into it since. Substance abuse is definitely something Downey knows about.

The recreation of the "Demon in a Bottle" cover is copyright by Marvel. Downey's picture is probably copyrighted by someone, but I don't know who.
Posted by Danny Barer at 9/30/2006 04:23:00 PM