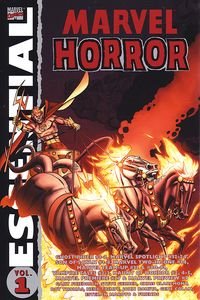 Marvel's "Essential" series is a terrific set of phone-book-sized paperback collections of various series, reprinted in black and white on cheap paper, with the result that a 500 plus page reprint goes for $16.99. One of the most recent volumes features the 1970's adventures of the Satan siblings: Daimon Hellstrom, Son of Satan, and his sis Satana. Yes, Satan was a Marvel Comics character. (In the 80's, the Reagan era, Marvel got cold feet and announced that this guy was a demon "posing" as Satan; but in these comics he's portrayed as the one and only, Prince of Lies, Morning Star, Nick Scratch, Mephistopheles, etc.) The back story goes that back in the fifties a woman fell for a handsome guy, albeit with pointed ears and arched eyebrows (no, not Leonard Nimoy), married him, and bore him a son and a daughter. Only later did she learn that she was -- dum dum dum -- The Bride of Satan! The site of her hub in all his infernalness drove her instantly insane. Meanwhile, Satan split with the little girl, and the son grew up and studied to be a priest. He eventually discovered his mother's diary and found out he was -- dum dum dum -- The Son of Satan! As with many children of divorces, he had severe father issues, and vowed to oppose Ol' Scratch. This being the mid-seventies, he took up the profession of exorcism, for which he'd wear a "ceremonial garb" of tight pants and a cloak. No shirt. (What an incentive to keep fit. Don't want that Satanic Six-Pack to sag.)

When Satan appeared in the comic, Marvel didn't exactly get subtle. He manifested either as a muscular sillhouette covered with flame lines, a la the Human Torch, or as a muscular bald guy with a bald head and horns. Oh, and he wore a Speedo made of flames. (Sounds like an oath -- "Satan's Flaming Speedo!" Or a comic book title -- "The Savage Speedo of Satan!")

What was most amusing to me was that Marvel's version of Satan tended to talk like another one of its arrogant monarch characters -- Prince Namor, the Sub-Mariner. Thus, Satan has lines like, "No more do you face sniveling demons -- you face SATAN, THE MASTER, PRINCE OF HELL, LORD OF DARKNESS -- you face your DOOM!"

SOS had a long run in Marvel Spotlight, and then was given his own series, which lasted only eight issues. He did better than his sis Satana (who couldn't quite go around bare-chested, but compensated by wearing a leotard with front cut-outs, in the manner that J-Lo would make famous 30 years later), who appeared in a few scattered stories in various places, did bad stuff, developed daddy issues too, and died heroically.

I suspect part of the problem with these characters' long-term prospects was the lack of merchandising opportunity -- not much market for Hellmobiles, or Son of Satan Underoos. (Though I believe Daimon did have a Slurpee cup to himself.) The stories did, however, feature some nice artwork by veterans like Gene Colan, John Romita and Sal Buscema; and stories by such then up and coming writers as Chris Claremont, Gerry Conway, and Steve Gerber.