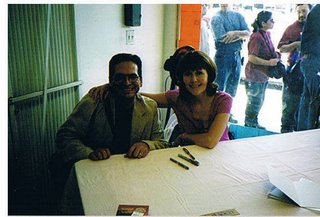 The episode of the new Dr. Who series that aired on Sci Fi Channel Friday night featured two British actors whom I've seen in person. One was Anthony Head, late of Buffy the Vampire Slayer, whom we saw (with his family) at a showing of Princess Mononoke at a Santa Monica theatre in the late 90's. The other was Elizabeth Sladen, who played my favorite of the Doctor's "companions," Sarah Jane Smith, back in the mid-seventies. I met Ms. Sladen in 2001 at a signing held at Ambrosia, the science fiction/comics store that was a few blocks from our house until it went out of business last year. Sladen reprised her role as Sarah Jane on the show, albeit as a woman of a certain age, which was certainly bittersweet; she had some wonderful moments with the Doctor (then played by Tom Baker, now in his latest regeneration played by David Tennant) and with his current companion Rose (as Rose's friend Mick put it, "Oh, mate, the missus and the ex. Welcome to every man's worst nightmare! "). This gave us a chance to see what happens to the companions the Doctor leaves behind -- as he must with all companions, since their lives are so much shorter than his -- particularly one whose feelings for him were obviously stronger than friendship.

Email ThisBlogThis!Share to TwitterShare to FacebookShare to Pinterest
Labels: Buffy, Celebrities, Dr. Who