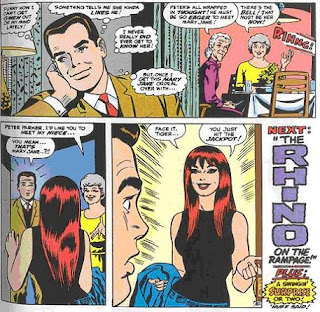 
The LA Times Calendar Section ran this article about the climax of Marvel's "One More Day" storyline, in which (spoiler warnings) Marvel decided to do a "hard reset" on the hitherto linear storyline describing the life of Peter Parker, aka Spider-Man.  For the uninitiated, Spider-Man's been published for 46 years; and the various Spider-Man comics that were part of Marvel continuity told a long, serialized story of Peter's various loves and losses, culminating 20 years ago (our time, not Spidey's) in his marriage to Mary Jane Watson, the girl his aunt's best friend set him up with (and who he avoided like the plague for several issues, in a running gag that ended with one of the most famous comics panels of all time:  He meeting this supposed pity-date and discovers she is a ravishing beauty, as only John Romita can draw one).

Making a long story short (and again, due spoiler warnings given), Marvel recently put Spidey into quite a corner.  Due to misplaced trust, Peter revealed his secret identity on national TV.  The end result was that his beloved Aunt May took an assassin's bullet.  Peter compromised most of his moral values trying to save her life.  At the end, he and Mary Jane jointly accepted a Satan-like demon's offer to save May's life and erase the public's knowledge of Spidey's identity -- at the cost of erasing the fact that Peter and MJ ever married.

This rebooted continuity is apparently designed to make the title more friendly to those who jump over to it from the Spider-Man movies (where Peter and MJ are an item, but not married); and to please nostalgic fans who felt that the true Peter Parker was the nerd who kept throwing away his chances with gorgeous women.  But deus ex machina changes like this (which are SOP at Marvel rival DC) just erase any interest I might have in stories that rely on a continuity that changes with the prevailing wind.  I'm still up, however, for a fun Spider-Man story that focuses on character, not precedent.