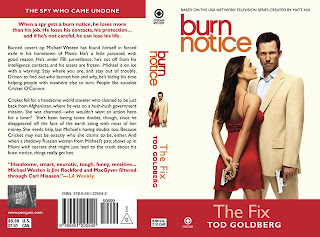 Burn Notice is basically The Prisoner updated for the 21st Century. Except ex-spy Michael Weston didn't quit; he was fired. And he's trapped in Miami, not an English village where all the men dress like Captain Kangaroo. And it's got Bruce Campbell instead of Leo McKern. And it's about dysfunctional relationships rather than dysfunctional totalitarianism. And there's no savage killer beachball waiting in the surf. And . . . well . . . okay, it bears no resemblance to The Prisoner.

Anyway, my cousin Tod is still writing the manuscript for a media tie-in novel; but the novel's cover is already done, and here it is, complete with ISBN number and bar code. Why not pick up a few copies. Christmas is only nine months away.
Posted by Danny Barer at 3/03/2008 09:56:00 PM