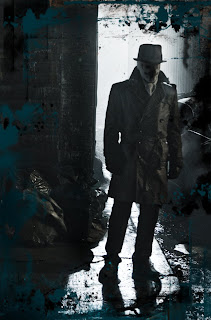 One year ago, director Zack Snyder's movie adaptation of Frank Miller and Lynn Varley's comic-book miniseries 300 debuted in theaters, and did tremendous business. It's no wonder; I saw a few scenes on cable TV last night, and they sucked me right in. The audience I saw it with in the theater last year certainly enjoyed it. Snyder even did well with some lines that sound much better in a word balloon than in someone's mouth. ("Give them nothing. And take from them . . . .EVERYTHING!")

One year from today, Snyder will try to replicate that success with a movie adaptation that people have been attempting for over 20 years: Alan Moore and Dave Gibbons's 12-issue series, WATCHMEN. Whether he'll succeed remains to be seen. WATCHMEN is a lot denser than 300; Moore and Gibbons wove their interlocking storylines out of characters in the foreground, characters in the background, flashbacks, flashforwards, even a pirate comic book read by a kid sitting on a streetcorner. There was enough story in WATCHMEN to fill a season of a TV series, so slimming it down into a movie will be a task and a half.

To give the audience a taste of what's coming in a year, Snyder has posted photos of some of the main characters (The Comedian, Night Owl, Ozymandias, Rorschach, and Silk Spectre) from the film. Some fans are complaining that Snyder has made some of the costumes look too much like Joel Schumacher-Batman-movie type armor. Frankly, I think they look cool.

One costume no one is complaining about, however, is Rorschach's (above.) Everybody's favorite Ayn-Rand-worshipping psycho looks perfect. Hurm.
Posted by Danny Barer at 3/06/2008 10:18:00 PM