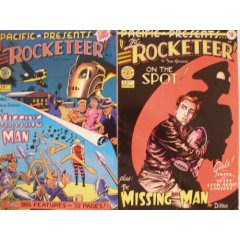 Back in 2003, Creation Entertainment held a comics convention at the Pasadena Convention Center. The event has become infamous for several reasons. One was that the company either promoted the con badly, or estimated attendance poorly; the place was filled with top comic book creators from around the country, yet relatively few fans showed up. Another reason was that the space shuttle exploded on the Saturday morning of the con. A third reason -- one we did not know about later -- was that a B-movie actress named Lana Clarkson was signing her final autographs at the con. Soon after, she would die by gunshot at Phil Spector's castle.

But one conversation I had at that con that sticks in my mind was my chat with Dave Stevens. Stevens had emerged in the '80's as one of the biggest stars of the first wave of independent comic book companies. He did a series for Pacific Comics (and later, after Pacific folded, other publishers) called The Rocketeer; and it was a wonderfully written and gorgeously drawn tribute to the pulps and serials and aviators of the '30's. (It was later turned into a fun movie by Disney that, alas, did not do well at the box office.) He drew covers for several other publishers -- covers that enticed you to buy the comic just for the cover, no matter what was inside. Most of all, Stevens was a master of drawing the female form. Stevens women were not just ink and benday dots; they lived and breathed and threatened to pop off the page.

Stevens and I somehow got on the subject of comic book creators who did not look their age. I used him as a prime example. At the time, he was 47; yet he still looked like a young star of some 1930's swashbuckler. One expected him to whip out a foil instead of a pencil.

Alas, now he will be forever young. Yesterday, Stevens died from leukemia at the age of 52.

Mark Evanier gives Stevens a fitting obit in Evanier's blog. I knew Stevens was a nice guy; but I did not know that he befriended Bettie Page, the '50's pinup model on whom Stevens based his character Betty in The Rocketeer, introducing Page to a new generation. Nor did I know that he helped Page financially.