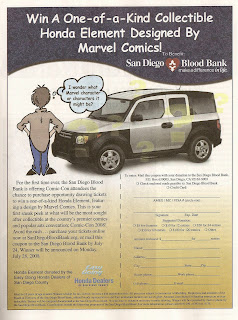 Today I received Issue #2 of the official magazinef for the 2008 Comic-Com International: San Diego. It's jam-packed with information about the con, including some helpful tips on how to get the most fun out of a con visit.

But one ad in the magazine -- reproduced above -- gave me pause. It states that the San Diego Bloodbank is "offering Comic-Con attendees the chance to purchase opportunity drawing tickets to win a one-of-a-kind Honda Element . . . ." The statement that one has to "purchase" tickets raised my antennae, because California strictly regulates raffles.

Then we get to the fine print at the bottom of the ad, which states, "No purchase or donation necesary to enter drawing."

To confuse things even more, the ad is accompanied by a coupon that sets forth "suggested" donations, which are essentially $5 for 6 entries and multiples thereof.

There's nothing "suggested" about the website for the drawing; it directs customers to pay for their tickets.

So if someone sends in the coupon without paying a cent, will that person have the same chance of winning as someone who pays a dollar for a ticket?
Posted by Danny Barer at 5/21/2008 09:43:00 PM