Tony Stark is So Money 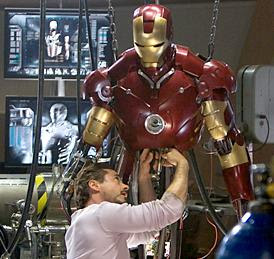 I am pleased to report that the IRON MAN movie lives up to its hype. It not only joins the ranks of the first two SPIDER-MAN and X-MEN movies as superior Marvel adaptations, it rates as the most Marvel-like of the movie adaptations so far.

It not only features superior performances from Robert Downey, Jr., Gwyneth Paltrow, and an extremely disturbing Jeff Bridges (who uses his lovable-guy persona to nasty ends), but the scenes with Iron Man himself are delightful wish-fulfillment. Further, it features a 40-something hero who lives on the westside, and who spends his maiden flight soaring over the Santa Monica Pier and buzzing Sunset Boulevard. What more could I ask for?

That question was answered by the bit after the closing credits.

Jon Favreau (the first Marvel director who has already played a Marvel character -- he was Foggy Nelson in the DAREDEVIL flick -- and who plays a supporting character in this one, the dour "Happy" Hogan) has a wonderful feel for both the dramatic and the action bits. And it looks like the movie has benefited from beating all the other summer movies to the door.
Posted by Danny Barer at 5/03/2008 06:58:00 PM