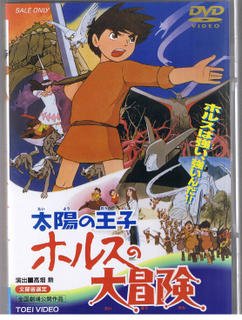 As a kid, Amy saw the English version of this movie (under the title "The Little Norse Prince") repeatedly on local LA TV stations. Although to our knowledge the English version has never been released on video, we spotted the Region 2 DVD of the Japanese language version in a Japanese bookstore on Sawtelle and bought it. We watched it last night. Since there were no subtitles and my knowledge of Japanese is highly shaky, we had to rely on Amy's knowledge of the story and the occasional word I could catch to interpret the movie. But it held up surprisingly well for a 1968 Japanese animated film; it has impressively fluid animation and skillful direction, and even manages to keep the annoyingly cute animal sidekicks to a minimum.

According to the Anime Encyclopedia, this was the debut feature from the director who would later go on to found Studio Ghibli with Hayao Miyazaki (who helped on this film), and wrote and directed the acclaimed 80's anime feature Grave of the Fireflies.
Posted by Danny Barer at 8/28/2005 02:51:00 PM